By: CIRCulator Editorial Staff
Reprinted From: The Climate CIRCulator 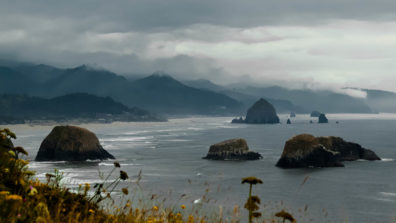 It’s that time again. It’s time to talk about atmospheric rivers, that key weather pattern wherein moist air from the subtropics is drawn in a line to the West Coast, delivering a significant portion of the Pacific Northwest’s winter precipitation.

Lots of winter precipitation is good for the Pacific Northwest, so long as it’s a certain type of precipitation: snow. According to a new study by CIRC and OCCRI’s very own David Rupp and Sihan Li, atmospheric rivers might not only create large precipitation events but also keep temperatures cool enough to turn that precipitation into snow.

The study, published in the International Journal of Climatology, suggests that under future climate change there may be less warming in our region during major atmospheric river events. This could help maintain the amount of precipitation that falls as snow in the Cascade Mountains.

Here in the Pacific Northwest, most of our precipitation falls during the winter months. And we really like it when it falls as snow in the mountains. This snow, or snowpack, stores precipitation for later. In spring, snowpack helps recharge our reservoirs, keeping our crops, lawns, and thirsty mouths watered throughout the warm, dry summer months. As temperatures warm under climate change, more of our region’s winter precipitation is expected to fall as rain instead of snow. In fact, this shift from snow to rain is already underway in many basins with the concomitant barrage of water management challenges close in tow. However, Rupp and Li point out, atmospheric rivers could help keep lessen the warming of storm systems somewhat.

To get to this conclusion, Rupp and Li examined projected future warming during winter precipitation events. Analyzing climate simulations of daily temperature and precipitation from a regional climate model of western North America, the researchers compared data for the present (defined here as the years 1985 to 2014) to data for the mid-21st century (2030 to 2059) under a moderate greenhouse gas emission scenario called Representative Concentration Pathway 4.5 (RCP 4.5).

(We call RCP 4.5 “moderate” because the scenario it entails assumes humanity starts cutting emissions of CO2 and other greenhouse gases in the coming decades, and, hence, that temperatures will start to level off. For a quick look at the RCP scenarios, check out CIRC’s website.)

Rupp and Li found there was a nearly linear but opposite relationship between the amount of precipitation and the amount of warming during large precipitation events, including events fueled by atmospheric rivers. Days with heavier precipitation are projected to warm less than days with light precipitation, the researchers found. Translation: Our big winter storms may not be as warm in the future as we once thought they could be. Which is great news for Cascade Mountain snowpack.

Rupp and Li attribute the reduced warming during large precipitation events in part to the precipitation’s source. Many atmospheric rivers originate in the subtropics (think Hawaii), and the subtropics (especially the oceans) are projected to undergo less future warming than northern latitude land areas. This means that atmospheric rivers will remain closer to their present temperature in the future, potentially preserving some of the snowfall in the Northwest.

Okay, it’s now time for the disclaimer. This does not mean that our snowpack is totally in the clear. The flip side of 30 percent of our precipitation falling in big events means the other 70 percent still falls as light precipitation. Rupp and Li’s analysis suggests that light precipitation is projected to fall at warmer temperatures, shifting toward rain rather than snow, especially at low elevations.

All this means that our region’s water management challenges are not going away. However, Rupp and Li’s research strongly implies that there may be a slight buffering effect during atmospheric rivers and other large precipitation events.

One thought on “Large Storms May Help Snowpack”