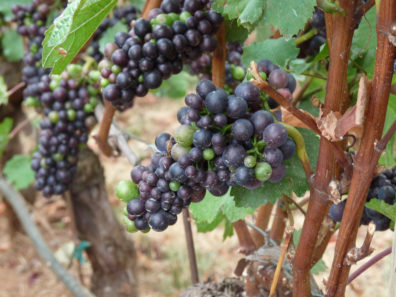 Pinot Noir Grapes in the Willamette Valley, by Ethan Prater, CC BY 2.0.

Paradoxically, for agriculture in the Northwest US, some of climate change’s most dramatic effects will be caused by shifts in climate that occur in distant locations. If this statement sounds strange on the surface, consider the degree to which global markets shape producers’ decisions. In the 21st century, agricultural decision-makers are operating within a highly complex and interconnected international food system. Thus, changes in production capacity and crop quality in other parts of the world could be a major driver of new opportunities and new vulnerabilities for agriculture in our region.

Because the Northwest is characterized by a temperate climate with most precipitation occurring in the winter months, climate change impacts on agriculture are expected to be less severe than in subtropical and tropical regions parts of the world. Moderate warming may be within the range of adaptability for many agricultural products and, combined with increased rates of photosynthesis caused a higher concentration of CO2 in the atmosphere, could actually be beneficial for some agricultural systems. This is not to write-off possible negative impacts to agriculture in the Northwest associated with projected increases in water scarcity, crop damage caused by increased temperatures, more frequent extreme weather events (including droughts), or changing pest and disease pressures. Yet, resilience to interannual climate variability and the sheer diversity of regional production systems are strengths that producers in the Northwest are expected to be able to draw on as they make management decisions in a changing climate.

In researching case studies of how climate change in other regions may shape agricultural management opportunities in the Northwest, I came across two particularly interesting examples: production of premium winegrapes and dairy products may ramp up in the Northwest as other parts of the US become less suitable for those agricultural systems. (Wine and cheese party, anyone?) I’ll focus on the winegrape case study today, and will return to the dairy story in a future article.

As warming causes parts of California’s wine country to become less suitable for premium winegrape cultivation, the Columbia River Basin and Willamette Valley may become better suited for those varietals.

Wine quality is shaped not only by terroir, or characteristics of the soil and cultivation practices, but also by climate conditions. A 2011 paper by Diffenbaugh et al., Climate Adaptation Wedges: A Case Study of Premium Wine in the Western United States, uses climate simulations for the Western US over the years 2000-2039 to understand how growing degree day and minimum and maximum temperature criteria throughout the growing season may affect the production of different grape varietals at the county scale. The authors apply the tremendously useful concept of “climate adaptation wedges” to explain how adaptation measures, including genetic development and varietal switching, may offset climate change impacts.

In 2015 California accounted for 90% of the total US wine production, with Washington and Oregon ranking second and fifth, respectively. Model results project that California may become less suitable for premium, high-value Vitis vinifera varietals, while parts of Oregon and Washington are expected to become better situated to grow those same varietals. Currently, the temperature regime in the high-value areas of California is near optimal, and thus any significant intensification of heat events is expected to negatively affect crop quality. In parts of the Northwest that are currently cold-limited, warming could provide gains in production capacity. The figure below, reproduced from Diffenbaugh et al. 2011, shows projected changes in the area suitable for different classes of winegrape varietals in four Western US counties. 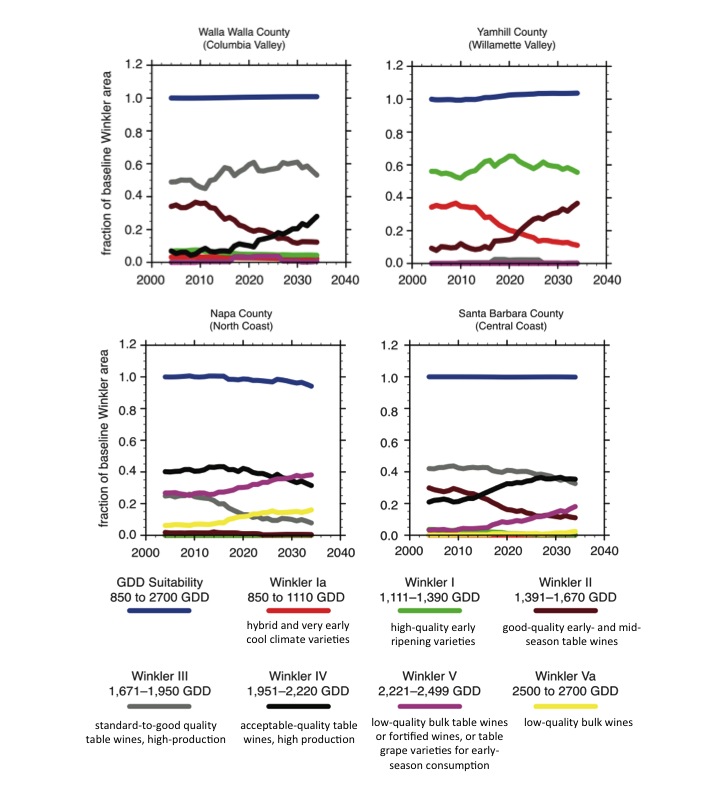 Winkler classes are used to define suitability of climatic regions for specific grape varietals and wine styles based on growing degree days (GDD) and seasonal temperature minimums and maximums. These graphs show the changing Winkler class area in four representative counties. The area is expressed as a fraction of the baseline Winkler area in each county during 2000–2009. Adapted from Figure 5 in Diffenbaugh et al., 2011.

Because vineyards take approximately two decades to reach maturity and the life of a vineyard is typically 30-50 or more years, anticipating and preparing now for changing climatic conditions is vitally important for producers. Model results suggest that near-term warming will likely provide opportunities for increased premium winegrape production in marginally cool areas. At the same time, the negative impacts of warming in some parts of California where premium varietals are currently grown may be best offset by transitioning production systems to focus on lower-quality, bulk wines.

This is just one example that suggests the ways in which projected changing growing conditions 1000+ miles away might influence opportunities available to local producers in the coming years. What emerging agricultural products do you expect in the Northwest because of climate change in other regions? Use the “Ask A Question” tab to share your thoughts and we’ll seek to explore those production systems in a future article.