By: Keyvan Malek and Sonia A. Hall 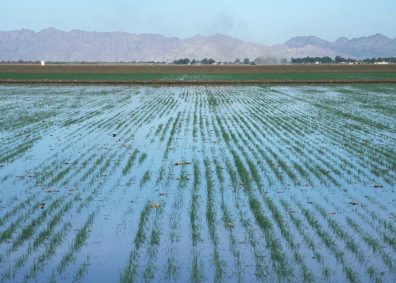 Investing in efficient irrigation systems usually requires significant capital. As with other capital-intensive investments, doing it would only make economic sense if the benefits exceed the costs. Each farmer can estimate the cost of switching their system to a high-efficiency system. But what about the benefits? What do they depend on? And will those factors they depend on change in the future? We used a model to play out some “what if” scenarios to address these questions in Washington’s Yakima Basin (see this article on using models in this way).Efficient irrigation systems can improve yields through a more efficient delivery of water to the root zone, where crops can access it. Say you have 2 acre-feet of irrigation water available. With a traditional system you might lose 40% of that water through evaporation, drift, or percolation beyond the rooting depth, so your crop will only have 1.2 ac-ft to use. With a high-efficiency system, that availability might go up to 1.9 ac-ft or more, which allows the crop to produce higher yields.

This benefit is particularly valuable during drought years. Continuing with the example above, if in a drought you only have 1 ac-ft available, making sure your crop gets close to 0.9 rather than 0.6 ac-ft would make a difference. And the more often you have droughts, the more valuable that additional water becomes. In other words, a higher return on the investment is expected if droughts are more frequent and significant.

We used a model that takes climate, soils and crop information, and calculates the movement of water, the occurrence of droughts, crop growth and yields, and farmers’ responses to climate change. By changing the climate inputs we gave the model, we explored what degree of change in climatic conditions would make investing in new, efficient irrigation systems a reasonable investment (check out this recorded presentation for more details).

Our results indicated that irrigated agriculture should expect more frequent water stress in the future, as a result of earlier snowmelt, increasing frequency and severity of droughts, and higher demand for irrigation water as the climate warms. This increased water stress should ensure the viability of investing in new irrigation technologies, right? Wrong. The results on farmers’ decisions suggest that investments will not grow at the same rate. We found two main reasons for this lower rate of investment: (1) the benefits are different for different crop types, and (2) when droughts are really severe, higher efficiency irrigation systems do not do enough to improve yields. 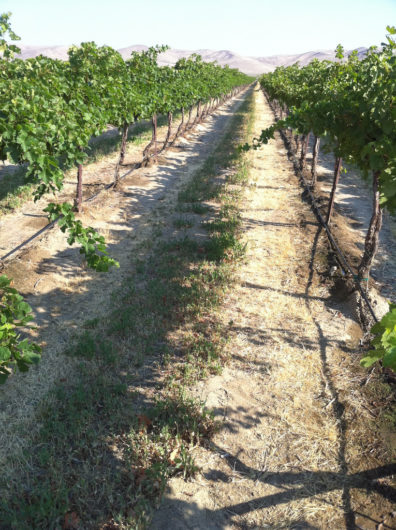 Let’s first explore why the results depend on crop type. We considered three categories of crops grown in the Yakima Basin: annual crops (e.g., wheat, potatoes, corn), perennial tree fruits (e.g., apples, cherries, grapes), and multiple-cutting forages (e.g., pastures, alfalfa, grass). Climate change is expected to reduce the potential yield for many annual crops, primarily because with higher temperatures the crops will mature more quickly, shortening the crop-growing period and the opportunity to accumulate yield. If the maximum yield that can be obtained, even with lots of water, is lower, then the value of providing as much of that water as possible is also lower. Hence, lower investment in high-efficiency irrigation systems. Perennial crops have higher value, and multiple-cutting forages can increase the number of cuttings per year as warming lengthens the growing season. Growers of these two crop types, therefore, should see greater benefits from investing in more efficient irrigation systems.

Now let’s explore what happens when droughts are really severe. In that case, even if farmers switch to more efficient irrigation systems, that additional water available to the crops would not be enough to recover from major droughts, and the improvement in yield will likely not cover the costs of the switch. In other words, we expect less investment in high-efficiency irrigation systems when droughts are very severe, simply because making the changes at that point will not be worth it.

It is worth highlighting that we explored just one decision—whether to switch irrigation systems—but farmers make many decisions, all the time. If farmers combine this investment with other adaptations that improve yields in the future (such as switching to crop varieties with longer growing periods), it might shift the cost-benefit balance on the efficiency investment.

The bottom line for the decision we isolated, however, is that the profitability of an investment in efficient irrigation depends on the crop type and the severity of future droughts. So farmers growing perennial or forage crops in areas where droughts are expected to be severe—but not too extreme—would probably benefit most from exploring investments in high-efficiency irrigation systems.