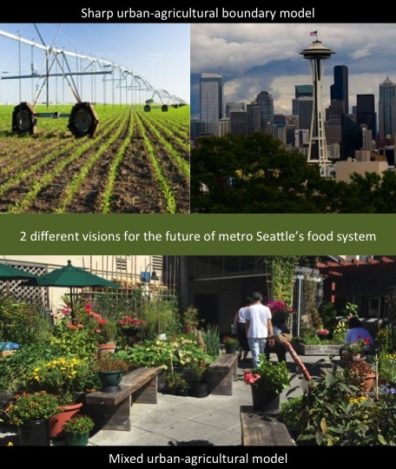 If you follow research priorities for agriculture and the environment at the federal and international level, you’re likely aware that the “Food-Energy-Water Nexus” has become something of a buzz phrase in recent years. The Food and Agriculture Organization of the United Nations and the National Science Foundation, for example, have put out calls for research proposals that investigate interconnections and interdependencies among food, energy and water (FEW) resources.

This booming interest in research and management that considers FEW systems holistically is coming about for good reason. The past century has brought widespread changes in terms of how society manages natural resources. Pre-industrial economies were inextricably linked to the availability of water and energy to do farm work. If one component of a farm were not managed sustainably, the effects would be immediately apparent. For example, if pumping water to irrigate a crop forced a farmer to spend more on energy costs than the value of their crop, the disparity in input costs and profits would quickly become apparent. With both industrial development and increasing urbanization came increasing separation of food, energy, and water resource management.

In our modern context, factors including climate change, population growth, urban development, and international trade agreements have led to increasing complexity of FEW management decisions. Often a decision that leads to short-term benefits for one resource (for example, synthetic nitrogen fertilizers dramatically increased global food production) ultimately negatively impact other resources (think of the water quality impacts and greenhouse gas emissions associated with synthetic fertilizer use). In order to find “win-win-win” solutions, resource managers must recognize that food, energy and water systems are tightly coupled, with each sector balancing, offsetting, and absorbing the changes in other sectors.

As a research associate with WSU’s Center for Sustaining Agriculture and Natural Resources who focuses on public perceptions of climate science and natural resource management, I had the opportunity to work with a team of researchers who are in the early stages of modeling FEW interconnections in the Seattle metro area. The guiding idea behind this modeling effort is that urban areas are “magnets” for consumption for FEW resources. When food is imported to feed an urban population it carries with it the “virtual” water and energy resources that were used elsewhere to produce, process, and transport it. Increasing local food production in the Seattle metro area could decrease virtual resource flows, but may utilize more energy and water locally for production and processing and may put increased pressure on already over-allocated water supplies in Washington.

During the summer of 2016, I conducted a series of interviews to understand how Seattle-area producers, consumers, industry representatives and energy and water resource managers and policy-makers are thinking about FEW interactions and possible policy changes on the horizon. Broadly speaking, the stakeholders interviewed for this project believe that it is a desirable goal to increase food production in King County and western Washington and increase consumption of locally produced food in the Seattle area. One of the most interesting things that I found over the course of these interviews is that regional stakeholders tend to hold one of two distinct visions of an ideal regional food production future, which imply different projected patterns of FEW resource interactions.

Advocates for the sharp urban-agricultural boundary model feel that sprawl is a serious concern and would like to maximize the efficiency of local food production by scaling up farming operations to meet a higher proportion of local food demand. These stakeholders expect that larger farms may be able to effectively implement technologies that ensure more efficient use of irrigation water and energy. Some stakeholders see larger local farms as a pathway toward decreasing reliance on agricultural products from outside of the region. They expect that larger farms would have greater capacity to supply grocery chains and distribution companies with local produce and that economies of scale could support increased local food processing for out-of-season consumption. Increasing local food processing could increase local energy and water use while reducing transportation energy use.

Advocates for the mixed urban-agricultural model focus on the social and cultural benefits of urban and local food production. These stakeholders state that it is important for consumers to strengthen their connection to the people who grow their food and to better understand the environmental considerations associated with agriculture. Stakeholders in favor of mixed urban-agricultural development emphasize the value of policies that support small- and mid-size producers in processing and selling products locally and generally focus less on the amount of local production than on supporting practices that conserve soil and water resources.

Most of the individuals interviewed as part of this research support a mixture of several land use policies and local food policies. Focusing on different values, and emphasizing those values in different combinations, leads to different policy alternatives. Policy approaches, in turn, influence how FEW resources are allocated, used, and how they flow across regional boundaries. As a next step, our research team is currently working to compile examples of different zoning approaches, including how urban growth boundaries and agricultural zones are defined and how different agricultural uses are incentivized. We are also interested in opportunities and consequences associated with emerging practices such as indoor vegetable cultivation and the use of reclaimed wastewater for irrigation. Detailed exploration of these many possible policy options is the ideal use of a FEW-system model.