By Kirti Rajagopalan and Sonia A. Hall 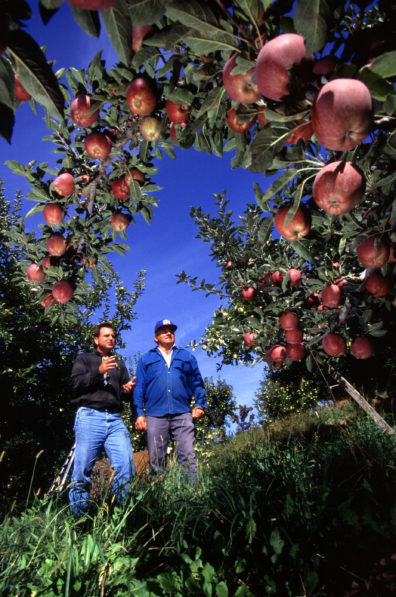 Though Appletown in this article is a theoretical location, producers sharing what practices work for them is a real source of information that can help others make decisions under uncertain future conditions. Photo credit: Scott Bauer/USDA, under CC BY 2.0

Weather is the most important driver of agricultural production. Year-to-year changes in the weather affect growing conditions, which then lead to important swings in yields, quality, timing and marketability of Pacific Northwest products such as apples, wheat, potatoes, and hay. In a similar way, changes in climate are leading to changes in growing conditions, and these changes also pose risks to production. Growing condition analogues are an approach to identifying and exploring past experiences that are relevant to understanding the risks expected in the future.

Over the years—and in some cases over generations—producers have refined their management practices to best address the complex interactions between the crops they grow and the wide range of growing conditions that determine the productivity and sustainability of their operation. These best practices are adapted to the local conditions and are continuously improved over the years, creating a rich body of location-specific agronomic knowledge. With the wide range of conditions that have occurred over the Pacific Northwest’s agricultural history—to say nothing of the range of conditions across different agricultural regions in North America—there’s a wealth of experiences out there that growers can tap into. The challenge is to know which experiences can help one determine how best to prepare for what the future will bring for one’s location. That’s where growing condition analogues come in.

Growing condition analogues are time periods or locations with current growing conditions that are very similar to those projected for the future in our location of interest. Here are two examples of this concept. The first is considered an analogue in time: years in the past in which the growing conditions have been similar to the expected future outlook. Last year, 2015, was the warmest year so far, contributing to water shortages for irrigated agriculture, and an intense wildfire season. Such shifts to earlier snowmelt because of warmer temperatures, even with similar year-long precipitation, is very similar to what’s projected to occur by the end of the 21st century. 2015 can be considered an analogue of future conditions in the Pacific Northwest, which can help inform how we prepare, as we discussed in a previous post.

In addition to analogues in time, one can find analogues in space: places—sometimes far-flung places—that currently have the kind of conditions we expect in our location of interest in the future. Say you are a grower in Appletown, WA, where monthly temperatures range from average lows of 25°F to average highs of 88°F, and there is 10 inches of rainfall a year, concentrated in the winter. And say that climate projections tell you that by the middle of the century, Appletown, WA will become 4 to 7°F warmer, with somewhat wetter winters and drier summers, more precipitation as rain rather than snow, a longer frost-free growing season, and more frequent temperature extremes. If you know that in Warmsville, CA growers currently experience very similar climatic conditions to those middle-of-the-century projections (see how this might work in Figure 1), then you can learn from what the Warmsville growers do—what crops they grow, what their management practices are, how they deal with variations in weather and their effects on their crops and their pests. You can also go out of your way to meet some Warmsville growers, to learn about location-specific best practices appropriate for their growing conditions, which you can expect at home in the future. 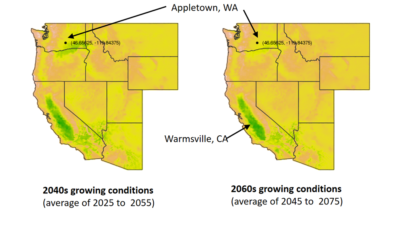 Producers have long relied on their and their peers’ past and current experiences to make decisions when conditions are uncertain. Using growing condition analogues is just an extension of that: it allows producers to view the impacts of climate change through the lens of not only their own real life experiences, but also those of other producers. The Center for Sustaining Agriculture and Natural Resources is creating an online, location-specific tool that will (among other climate-related things) help growers explore growing condition analogues. We will describe this tool in a future post, when it is released later this year. In the meantime, if you have questions about growing condition analogues and how you can use them, send them our way. We’ll ask the experts for an answer.