Reprinted From: The Climate CIRCulator 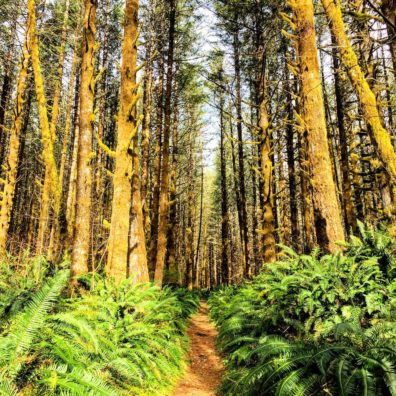 YOU’VE PROBABLY SEEN the charts from the Mauna Loa Observatory in Hawaii. For the past seventy years, the observatory has been monitoring atmospheric carbon dioxide levels (CO2). Along with revealing how this important greenhouse gas has grown steadily year after year, the observatory’s month-by-month data has also tracked an interesting season-to-season variation: CO2 goes up in the fall and winter and down in the spring and summer. The reason is plants.Biomass, particularly in the Northern Hemisphere, increases during the spring and summer months as plants sprout and grow, drawing down global CO2. The following plant dieback in fall and winter releases CO2 back into the atmosphere. In plain language, this yearly cycle is the Earth taking a breath. The magnitude and influence of the biosphere’s respiration is the topic of a recent paper published in Nature.

In the paper, Peter Reich and colleagues examined how CO2 from plant respiration may respond to warming temperatures expected with climate change. As global temperatures rise due to human emissions, the balance of carbon uptake (through primary production) and carbon release (through respiration) by plants is expected to tilt toward the latter, creating something of a positive feedback loop with rising temperatures. In other words, increased global temperatures will result in more CO2  in the atmosphere instead of being stored as plant matter.

The relationship between warming temperatures and plant respiration is not perfectly linear—or consistent—because vegetation has the ability to adapt or acclimate physiologically. To illustrate this, Reich and colleagues explain that if a plant’s respiration rate does not change when moved from a 20 degree Celsius environment to a 25 degree Celsius environment, then it would have acclimated 100 percent; if respiration went down 20 percent, then it is acclimated by 80 percent. For those of you who understand quantitative definitions better, think of acclimation in terms of elasticity, or the ratio of the percentage change of respiration to the percentage change of temperature.

To understand how well forests can acclimate, Reich and colleagues measured the respiration of tree species from Boreal forests found in Minnesota. They found that trees can adapt at much higher rates than previously estimated.

In experiments with temperatures of 20 and 23.4 degrees Celsius (or 68 and 74.1 degrees Fahrenheit) the researchers discovered that trees ‘acclimated’ by 78 to 81 percent. These findings are notably higher than previous research, which put the acclimation estimates closer to 30 to 50 percent. Reich and colleagues explain the divergence between their work and previous estimates of acclimation as a result of the methods used. For example, previous research often relied on enclosed greenhouse facilities to conduct experiments that lasted only weeks to months. In contrast, Reich and colleagues used an open air facility that could control soil and air temperatures with experiments that ran for years (2009 to 2013) instead of months. In other words, they argue that their methods—and, as a result, findings—are better.

These findings are important because climate models used to understand the magnitude of future warming represent this exact carbon feedback loop between the atmosphere and biosphere. If these models underestimate the feedback loop (with too high of estimates for acclimation) then they could likely underestimate future warming. Conversely, if they overestimate the feedback loop by using too low of acclimation responses, as argued in this paper, then climate models may produce temperature projections that are too high.