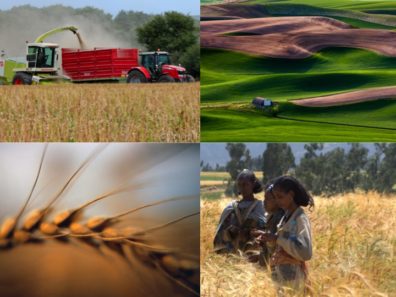 In the Climate Modeling Series, I have explored what you need to know to interpret and use models effectively (you can find the four previous posts in the series by searching “Climate Model Series” on www.agclimate.net). For this final installment, I’d like to use hot-off-the-press research of global significance to illustrate why, when it comes to climate change research, two or more “opinions” are better than one.

Published in September in Nature Climate Change, the paper “Similar estimates of temperature impacts on global wheat yield by three independent models” was authored by a large team of international co-authors, including researchers affiliated with WSU’s Department of Biological Systems Engineering and the AgWeatherNet program. They compared projections of global wheat yield under a 1°C temperature increase, and found that the models consistently project declining global wheat yields.

Climate scientists believe that if current greenhouse gas emissions trends continue, we are on track for 2°C global average temperature increase by the end of the 21st century. In that context, the 1°C (or 1.8 °F) global average temperature increase assumed in this study may sound relatively minor, but such a shift would be linked to a substantial increase in heat and drought stress in many parts of the world.

As would be the case with a sobering medical diagnosis, multiple consistent expert opinions increase our level of trust in the conclusions. Comparison of independent expert opinions, in this context known as “multi-method model intercomparison,” plays a critical role in climate and agriculture research: when separate modeling approaches arrive at similar projections, we can be more confident in those results and can move forward toward making management decisions on the basis of projections.

As you can see in the figure below, the estimated effects of increasing temperature on global wheat yield from the three different modeling methods were similar. The average change in global wheat yield projected by the different approaches ranged from a 4.1% average yield reduction to a 6.4% average yield reduction (all projections are reported with error bars indicating 95% confidence intervals). Overall uncertainty of the averaged model approaches is less than that suggested by individual projections, reflecting a more robust projection about future conditions. 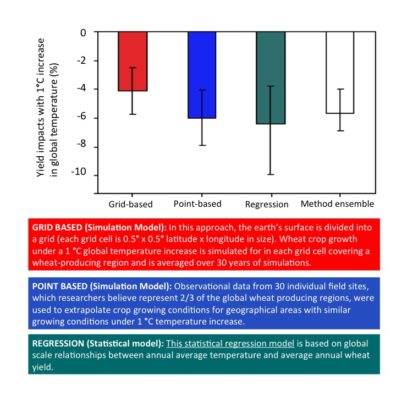 There are three important caveats that the authors point out: 1) climate change impacts on crops do not increase linearly with increasing temperature, and the projections made with the different modeling methods diverge more when greater temperature changes were considered; 2) the effects of elevated CO2 on crop growth are not considered in this analysis, but increased CO2 fertilization is expected to compensate for some or all of the negative effects of increased temperature under full irrigation and fertilization, 3) global yield impacts should not be applied to particular regions, as the effects of increasing temperature impacts on wheat yields are highly variable, and some regions, such as the Northwest US, are projected to experience yield increases under climate change.

Despite these caveats, the findings of this study provide useful information for producers in the Northwest US and other relatively cool parts of the world, where projected climate change may actually contribute to increasing wheat yields (the possibility that the Northwest will become an even more critical food production region under future climate change is a topic that we plan to explore in more depth in future articles here at www.AgClimate.net).

This study provides a great example of the value of multi-method intercomparison efforts. The bottom line for interpreting and using models effectively, therefore, is that agreement across multiple independent modeling methods enhances our confidence in projected outcomes. In this case, looking at the results of grid-based and point-based simulation models and a statistical model increases our level of certainty about how climate change will impact on wheat yields globally.

You may also be interested in this Washington Post article about this study, which focuses on what this research may mean for the global food supply of the future.