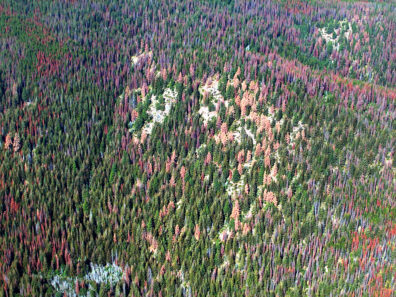 HERE IN THE NORTHWEST, wildfires and insect outbreaks are two major forest disturbances that we’ve seen a lot of recently. As reported before in the CIRCulator, we are likely to see more wildfires and insect outbreaks in the future as our climate changes. But what has been most concerning is how two disturbances working in tandem could affect both the health of our forests and our economy. It is commonly assumed that future increases in insect outbreaks will lead to future increases in wildfire severity, but, says a new analysis, this assumption might not only be wrong, the exact opposite may actually be true.A recent paper by former Oregon State University graduate student Garrett Meigs and colleagues published in Environmental Research Letters examined the intersection of recent insect outbreaks and large wildfires across Oregon and Washington from 1985 to 2012. What they found was surprising: in forests with prior insect outbreaks, subsequent wildfires were generally less severe.

Wildfire severity—the ecological impact of fires defined as the change in dominant forest vegetation—depends on insects, vegetation, topography, and weather. Using a statistical model, the authors examined the effect of each of these factors—minus weather—on wildfire severity in forests with prior outbreaks of either the mountain pine beetle or western spruce budworm.

By attacking pine tree trunks and branches, adult mountain pine beetles can quickly kill trees if the outbreak is large. Larvae of the western spruce budworm eat tree foliage and, after several years of such infestation, can kill their host trees. Over the last several decades, the Northwest has seen many outbreaks of these two native insects, which, in some cases, have devastated forest stands and left them full of dead wood.

Given this record, one might expect to find that subsequent wildfires were more severe. However, according to Meigs and colleagues’ results, it turns out that in forests with higher cumulative insect damage, a subsequent fire was in fact less severe. The authors suggest that these large insect outbreaks have a forest thinning effect: reducing the amount of live vegetation and redistributing burnable material from the canopy to the forest floor as trees die and lose their foliage in the process.

The story is a bit different for wildfires in areas with prior outbreaks of the western spruce budworm. The researchers find that severity is generally lowest in wildfires occurring soon after outbreaks, consistent with assumptions about defoliation and vegetation thinning. Wildfire severity, according to the researchers, tends to increase as the time interval between budworm outbreak and fire increases. But by about twenty years after an outbreak, the effect on burn severity is neutral, suggesting that vegetation has had sufficient time to recover.

Meigs and colleagues conclude their study with a precautionary note: forest management policies focused on reducing wildfire risks, especially in forests with prior insect outbreaks, should reconsider the assumption that wildfires are more severe after an insect outbreak. Wildfires may actually be less severe. The total area with overlapping insect outbreaks and wildfires is relatively small compared to the cumulative area of forest disturbances, including insect outbreaks, tree diseases, and wildfire during the decades studied in this paper. Thus, note the researchers, it will remain important to consider individually how each disturbance will impact forest health and ecosystem services.