by John Abatzoglou and Katherine Hegewisch

Reprinted from: Climate of the Inland Northwest US

Concerned about record breaking temperatures tomorrow, low spring snowpack this winter, or warming temperatures over the next half century? Coping mechanisms exist to minimize detrimental impacts (or maximize opportunities) from these three types and timescales of climate impacts. From the perspective of agricultural impacts, data -whether it comes in the form of observations, weather forecasts or climate projections- can be an incredibly valuable asset. Yes, weather forecasts are sometimes not perfect, and climate projections have uncertainty. However, numerical weather models used by the National Weather Service  have contributed to an estimated $31.5 billion dollar a year benefit to the US not to mention how these forecasts have saved lives.

Models and forecasts only have value if they result in improved decision making. The National Weather Service, and derivate products from the private sector and countless apps, now makes it relatively easy to get a quick look at weather forecasts for the next few days.  There is forecast uncertainty implicit with any forecast:  some of which we are privy to such as the spaghetti plots for tropical weather systems, others which go on behind the scenes.

Information on climate projections has become more accessible in recent years. However, it is still a challenge for many researchers, let alone stakeholders, to acquire and use climate projections. Output from climate model simulations are (1) typically stored in formats that are foreign to most without a background in computer science or programming, (2) formidably large to download and analyze without high-performance computing, and (3) often not refined to reflect conditions specific to a location of interest from individual users.  This creates a substantial barrier between data producers and consumers.  Data barriers inhibit incorporating information to plan for, cope with, or try to optimize climate impacts that may arise in a changing climate.

The Applied Climate Science Lab at the University of Idaho, with work primarily by Dr. Katherine Hegewisch, has begun to break down these barriers. We have developed and are developing a number of tools to access, visualize and download site-specific climate data  and projections through projects supported by the Regional Approaches to Climate Change in Pacific NW Agriculture, the Climate Impacts Research Consortium (CIRC) and grants funded through the USDA NW Climate Hubs, USGS NW Climate Science Center and Google.

We highlight a few tools that might be of interest to agricultural stakeholders during a recent webinar that you can watch through the Climate Learning Network. As part of CIRC we are developing a more comprehensive NW climate toolbox that will build on many of these tools and also address data relevant to water resources.

A number of spatially and temporally complete historical and current near surface climate and weather datasets now exist. These data use the vast and valuable network of in-situ observations, but overcome some flaws with gaps in observations, sparseness of stations in many locations and inconsistency in terms of what elements are recorded. We developed a gridded surface meteorological dataset that covers CONUS at a 4-km spatial resolution from 1979-yesterday that includes temperature, humidity, winds, solar radiation and precipitation. However, these data are challenging to access for most due to the aforementioned reasons. To overcome the burden of utilizing these data and other large spatial datasets of climate and remote sensing, a team of us from the University of Idaho and Desert Research Institute have developed Climate Engine- where initial support for the project came from Google.

Climate Engine lets anyone with a web-browser gin up maps, examine time series and download digital data without needing to process the entire data archive.

As an example, here is a map showing precipitation anomalies for the northwest from April 1-June 4 2016. You can follow this link to view this in Climate Engine. 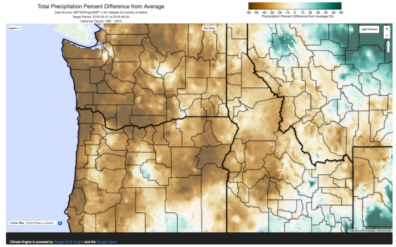 The REACCH project focusses on dry land farming of the Palouse in the Pacific NW, where the predominant crops are cereal grains (wheat/barley), peas and canola. We have provided several web tools for aiding agriculture, these include both climate/weather data tools and decision support tools co-produced with REACCH scientists.

With our climate/weather tools you can summarize historical climate, recent climate conditions, seasonal forecasts and future projections for any location of interest. An example summary table of a number of climate metrics that could be important for agriculture is shown below, where the user selects a location and gets a summary of both contemporary climate normals and projected changes for different time periods. 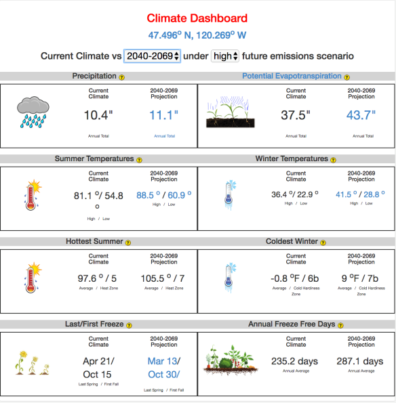 We have summarized a number of climatologies (30-year periods) of raw climate and derived climate metrics (e.g., cold hardiness, growing degree days, reference evapotranspiration) that may be applicable for agricultural decision making as it relates to impacts on existing cropping systems and opportunities for novel-cropping systems. The idea here is to synthesize metrics from the multiple terabytes of daily climate data that could help inform adaptation approaches for agriculture and forestry. Support for this tool is coming from the USDA NW Climate Hub.

For example, certain wine grape varietals have growing degree day requirements (base 50F) that are not currently met across much of the NW, providing one limitation on cultivation. However, by the mid-21st century, the additional warming results in a large increase in accumulated heat that may allow for sufficient heat for maturation. 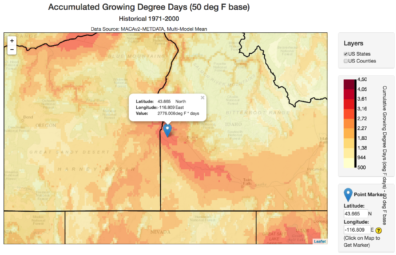 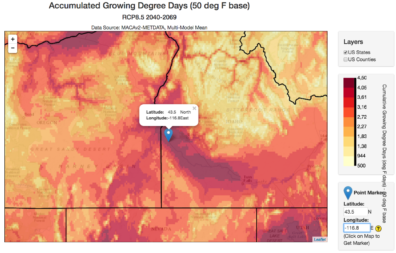 On the site we developed, users can select from a variety of metrics, time scales (early, mid, late 21st century), climate scenarios and models. For simplicity, we show the multi-model average in the image above.  Users can also “mouse” over to extract information for a specific pixel, or download these maps in a format that can be used in ArcGIS or equivalent.

The NW Climate Science Center’s funded a project to create a coordinated set of climate, hydrology and vegetation scenarios called Integrated Scenarios of the Future Northwest Environment. This project created a lot of data that was challenging to access.  We have developed numerous tools to visualize the project’s data. For agricultural decision making in the Northwest, the amount of water storage in the mountain snowpack and the timing of streamflows are key factors for irrigated crops.  For example, irrigation is responsible for Wenatchee becoming one of the world’s largest producers of apples, where the Wenatchee Reclamation District serves 12,500 acres on 34 miles of canal from the Wenatchee River at Dryden through Wenatchee to Rock Island on the Columbia River. Natural streamflows at Rock Island  give an indication of the timing of water availability for irrigation of apple orchards.  Using the streamflow web tool, we see substantial drops in streamflow during June-August when irrigation demand peaks. 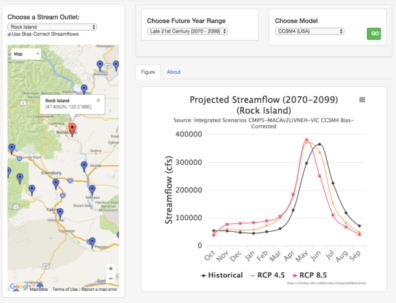