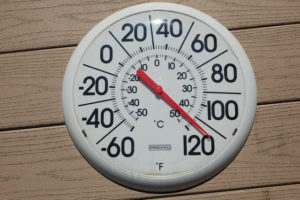 THE ACCURACY OF WEATHER FORECASTS declines sharply after about five to eight days. Beyond 10 days you may as well just use the averages taken from the meteorological record for the dates you are interested in, meaning you might as well ditch weather forecasting altogether and turn to climatology. But in some circumstances, specific types of weather might be predicted weeks in advance.

Writing in Nature Geoscience, Karen McKinnon of the National Center for Atmospheric Research and her colleagues found that some heat events in the eastern U.S. are predictable by as much as 50 days in advance. (In their paper, the researchers define heat events as at least two successive days above the 95th percentile over the eastern US.) The researchers arrived at this discovery after identifying statistically significant relationships between a temperature pattern in the Pacific Ocean, what they call the “Pacific Extreme Pattern,” and heat events as much as 50 days later over roughly the eastern third of the continental U.S.

The breakthrough in McKinnon and colleagues’ approach is how it fills a gap between weather forecasts and seasonal climate forecasts.

The mechanism connecting the Pacific Ocean to the eastern U.S. discovered by the researchers is a pattern of slowly evolving atmospheric disturbances that gradually result in a strong ridge over the target area. While this paper only looked at heat events in the eastern U.S., in our view the same mechanism noted by the researchers should also lead to long-lead predictions of heat events in the Northwest. Similar research points to this possibility.

In 2003, University of Washington’s Nick Bond (now Washington State Climatologist) and Gabe Vecchi (now with the National Oceanic and Atmospheric Administration) showed that Northwest precipitation and the likelihood of flooding could be linked to a tropical phenomenon called the Madden-Julian Oscillation. In their paper, McKinnon and colleagues also note that when the previous 30 days had been unusually dry, heat events were more likely to occur within the next 40 days.

Note: Lead author Karen McKinnon has a link to OCCRI. McKinnon was a NOAA Hollings Fellow (summer intern) with OCCRI Director Phil Mote at the University of Washington in summer 2009 working on climateprediction.net.