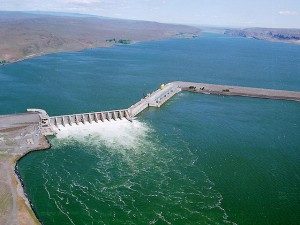 Wanapum Dam at normal operation on the Columbia River (photo: Dept of Ecology)

Water is the life-blood of agriculture. Without an adequate supply of water we cannot produce, process, or prepare food. You’ve heard the catch-phrase “No Farms, No Food”? The same could be said for water: “No Water, No Food”.

Actually, water is even more important than that. It is the life-blood of civilization. There was a study published a couple of years ago that evaluated the importance of water (and grain) as it related to the development of the Roman Empire (Dermody et.al. 2014). The conclusion of this study is that Rome ultimately was undone by the fact that it had to expand its empire too far to secure sufficient water resources to feed itself. [Someday I’ll write a post about this study – it’s an open access journal so anyone with a computer can read it.]In the Pacific Northwest (PNW) we’ve taken the plentiful availability of water for granted for a long time. This is, in part, because historically we have had plenty of available water at a relatively low cost. That’s not been the case for every specific location or need for water in the region, but generally speaking we’ve not had the kinds of problems that have been experienced in many other parts of the world. However, even in the PNW we are approaching the point where the combination of climate and physical water supply, population growth, appropriation and legal claims, and the regulatory constraints on our water system are placing such pressure on our water resources that we really need to start paying attention to our life-blood. 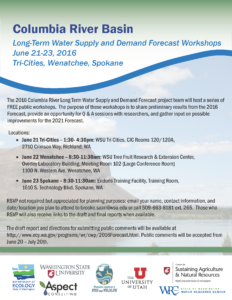 Next week we will be hosting a series of important opportunities to learn about and discuss water in the Columbia River Basin (CRB). The Washington Department of Ecology’s Office of Columbia River is required by the Legislature to provide a report updating projected supply and demand for water in the CRB. Ecology has contracted WSU and partners to update the forecast we produced in 2011 and present these new 2016 findings to communities and industry in the state. We will be hosting workshops in Tri-Cities, Wenatchee and Spokane on June 21-23 to release preliminary findings of the new forecast and gather input for improving the forecast. You can learn more about the workshops and download the event flyer with these links.

If you are unable to attend the workshops, you can still access the report (draft to be released soon) and provide comments and suggestions at this webpage.