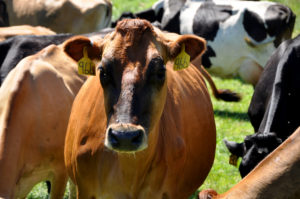 It’s never too early to start thinking about management strategies to minimize the impact of summer heat on cows. It just takes one real hot period of heat to put a big dent in milk production and reproductive performance. Last summer in 2015, Sunnyside, WA saw 45 days above 90°F, and 10 days above 100°F (NOAA). The highest reaching 108°F on June 28, 2015. That record hot day wasn’t in late July or early August, as normally expected, but was in June, and was also part of a 9 day stretch of high temps above 99°F degrees.Adapting to extreme periods of heat will prove to be the key piece to avoid harsh economic losses in a changing climate (Mauger, et. al, 2013; Key, et. al., 2014). Cooling methods such as shades, fans, ventilation and easy access to fresh water are essential to cooling cows, but the industry is seeing more and more producers adopt evaporative cooling systems to cope through the high temperatures. Some examples of evaporative cooling systems on dairies are soakers, misters, foggers, cooling stall pads and cooling barn walls. Evaporative cooling occurs when water is evaporated, and the energy (heat) used to evaporate the water cools the evaporative source (skin or the air, depending on the method). Farmers that have invested in heat stress abatement strategies say the initial investment is well worth the money, and pays for itself quickly. Take a few minutes to see how J &K Dairy farm in Sunnyside, WA made the decision to invest in soaker cooling technology by clicking on the link below.

In addition to extreme heat waves, warming temperatures associated with climate change will enhance the negative impact to milk production; considering dairy cattle are extremely vulnerable to extreme high temperatures and humidity. A study investigating the impact of climate change on milk production found that concentrated dairy farming areas that are currently experiencing the greatest heat related impacts (e.g., Arizona, Florida) are also predicted to experience the greatest additional losses with climate change (Mauger, et. al., 2014). Figure 1 (below) demonstrates the loss of milk production on an annual scale comparing the historical temperature humidity index (THI) to the THI projected in 2050 with climate projections for selected concentrated dairy farming regions in the US. In the next 30 years, the Yakima region would expect an impact of approximately 13 lb (6kg) of milk loss/cow/day.

Adapting to hotter periods of heat, and more frequent periods of heat during the summer months is a critical reality to avoid economic losses. The USDA Economic Research Service (Key, et. al., 2014) found in 2010, that the impact of heat stress caused the average US dairy about $39,000. Climate models project that heat stress will “cause production loss to almost all US dairies, with 4 to 18 percent of dairies experiencing a loss greater than 2%” (Key, et. al., 2014). Figure 2 (below) shows a visual scale of projected temperature change for each season (Implications of Climate Change in the Pacific Northwest, Island Press, 2013). It is clear that summer will become the critical season for dairies to build resiliency on their operation, and beat heat stress.

With the periods of heat increasing, and arriving earlier in the summer and later into the fall, it is necessary that dairies are prepared to cool their cows effectively and efficiently to maintain healthy cows and keep profit margins. In the video link below, Joe Harrison (Washington State University), Jay Gordon (WA State Dairy Federation) Guillaume Mauger (University of Washington), and Jason Sheehan (J&K Dairy, LLC) are interviewed to provide information and education on the topic of climate change impacting dairy production and how producers are successfully adapting to the heat.

An adaptation guide planning workbook specifically designed for animal agriculture is available online to assist in identifying farm vulnerabilities to climate associated risks. This workbook is available to help producers, consultants and advisors make decisions to build resiliency on an individual livestock operation.

For more on animal agriculture and climate change, visit http://extension.org/60702 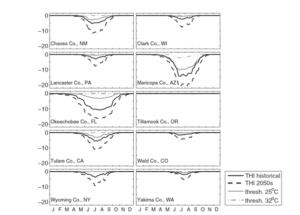 Figure 1. The annual cycle of milk loss (kg/day) for selected counties for the historical period (1950-1999) and projections for the 2050s. Black lines show the cycle of loss computed from S. Pierre, Cobanov and Schnitkey (2003; Equaltion 2), gray lines show the results of the linear loss relationship by Hayhoe et al. (2004; 1.15 kg/°C loss after temperature exceeds thresholds of 25°C and 32°C respectively). Figure and figure description taken directly from Mauger et.al., 2013. 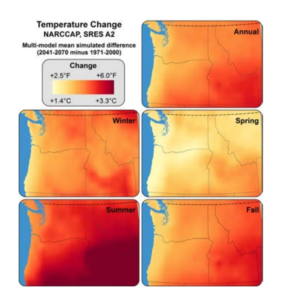