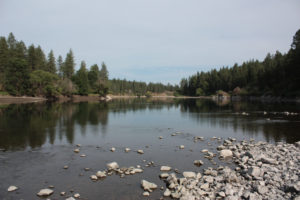 A recent paper in the Journal of Hydrology addresses the issue of ground water recharge and climate change. In the study, Thomas Meixner of the University of Arizona and colleagues examined the impact of climate change on groundwater recharge in eight basins across the western U.S., including the Northwest’s Columbia Plateau and Spokane Valley.

Studies of climate impacts on groundwater recharge that use global climate models tend to be too large in scale to be relevant to decision making at the regional level. At the same time, local studies linking climate change and aquifers tend to be too narrowly place-based and specific to be applicable for developing water policies across river basins, states, or regions, note the researchers.

To address this problem, Meixner and colleagues linked downscaled global climate change projections of temperature and precipitation through the year 2100 with available data on recharge rates and amounts for aquifers.

1)         Diffuse (from precipitation infiltrating across the landscape),

The researchers then modeled how these four recharge mechanisms are expected to respond under future climate conditions, including rising temperatures, for each basin. Although a simplified version of reality, characterizing the recharge mechanisms for each basin in this way allowed comparability and transferability of methods among basins and across the western region. The results were then labeled with low, medium, and high confidence levels. (Global warming impacts on such variables as evaporation, and feedback from water demand and changing agricultural practices, were also incorporated into the models.)

In the modeling for mountain basins, rising temperatures produced a decrease in snow water equivalent (SWE) as more snow falls as rain. This reduced mountain recharge produced declines in groundwater recharge. Although mountain aquifers are small, note the researchers, they have an essential role in storing and conveying groundwater down-basin. Warming-induced reductions in mountain snowpack and associated SWE directly influenced groundwater recharge in basins connected to that mountain aquifer, the researchers found.

Overall, future behavior of aquifers in the eight western basins depends in large part on future changes in precipitation, which are uncertain in the study areas; although southern portions of the study area showed a tendency to experience declines in recharge.

In the Columbia Plateau aquifer, diffuse groundwater recharge mechanisms are prevalent along with irrigation, according to Meixner and colleagues. In their modeling, diffuse recharge increased to the year 2100, with higher precipitation being greater than evaporation in cool months and decreased irrigation recharge occurring during the growing season. However, given the uncertainties in the modeling, the researchers note, recharge rates could either increase or decrease slightly in the future.

The Spokane Valley aquifer experiences focused recharge from the Spokane River, two reservoirs, and tributary flow from upland basins; and diffuse infiltration from precipitation. Here Meixner and colleagues’ modeling showed that warmer temperatures and slight precipitation increases from climate change have an uncertain net effect on groundwater levels because either evaporation or precipitation changes could dominate recharge.