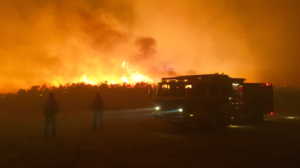 “This place is gonna burn.” That’s what I told my Dad a year ago (May 2015) when we were at our cabin at Crawfish Lake, 30 miles outside of Omak, Washington. I wish I had been wrong. But the forests were dense with unhealthy and downed trees. That previous summer (2014), the Carlton Complex—a record fire at the time—burned over 250,000 acres, destroyed 322 homes, and harmed numerous pastures and livestock. 2014 was the seventh hottest summer in Okanogan County in the last 120 years. My prediction of future fires would come to fruition sooner than I expected. In a few months the county would experience the hottest summer on record and produce an even larger fire.Statistics take on a different meaning when you think about how they could affect you personally. Temperature rose 1.3°F the last century and are projected to increase 3° to 10°F by the end of this century. Scientists project a warming climate will cause spring peak flows to occur three to four weeks early by 2050, producing lower summer flows and a greater pinch on irrigation-dependent farmers. Warmer temperatures will also likely increase the occurrence of fire. Hearing all these statistics, it’s easy to get lost in the numbers. So how can we get a picture of how people were affected by the record warm summer? And what does that picture tell us about our future in a warmer climate? 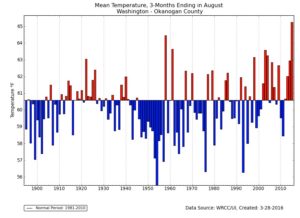 Records of mean summer temperature in Okanogan County, WA. This and other information on the 2015 summer in Okanogan County are based on data acquired from the WestWideDroughtTracker, which derives its data from the PRISM (Parameter-elevation Regressions on Independent Slopes Model weblink http://prism.oregonstate.edu) and the National Weather Service Cooperative Observer Network (COOP).

Fast-forward three months after my visit to our cabin, and I was given the opportunity to see many such pictures. This happened at a “boot camp” for scientists and managers outside of Eatonville, WA run by the United States Geological Survey (USGS) Northwest Climate Science Center. Many of us at the camp grew up and are now graduate students or professional scientists in Oregon, Idaho, and Washington. I myself grew up in Omak and am a seventh generation Washingtonian. Others were members of tribes, grew up on farms, or came to the Pacific Northwest as scientists or graduates. As I sat down and got to know others around the camp, conversation naturally drifted toward how hot and dry the summer had been across the region—it was the hottest summer on record in many areas, including Okanogan County. With our diverse backgrounds, I was getting a collage of stories of how this summer was affecting these people personally. We also had a USGS videographer who trained some of us how to film and edit videos. So I put these new skills to use to document the stories of how the summer had altered their lives, and how their science was helping to mitigate for these changes to the region.

You can watch the video here:

One thing that stuck out for me is we all experience the effects of an exceptionally warm summer a little bit differently. People in the city are overwhelmed by the heat waves that are especially unbearable in the city. People from indigenous tribes have fewer first foods. Forests that sportsmen have hunted for years were burned. Discussing these impacts was especially poignant for me: that same week record fires were sweeping through Okanogan County, burning more acres than the Carlton Complex. In talking to my parents in Omak that week, I heard that people in our neighborhood were encouraged to evacuate and the fire got within ½ mile of our home. Our house and pasture were fine, but some of our friends and neighbors were not so fortunate. Their homes, livestock, or property were damaged or ruined.

Despite the moving stories, it was hopeful to hear how all of us were in our own ways working to make the Pacific Northwest more resilient to future climate change. That record warm summer is likely a foretaste of the challenges we as a region will face under a future climate. Many of the scientists and managers at the boot camp are tackling these challenges. Some were helping build habitat for salmon to endure warm summers. Others were studying what factors cause large fires. Others were studying what habitats are key for conserving sensitive plants and animals.

And our cabin? Much of the forests around the lake and houses in nearby Tunk Valley were burned. But thanks to the brave efforts of many firefighters our cabin and the cabins around the lake were saved. The science is clear. The exceptionally warm and dry summer we experienced will begin to become the norm. Fire will continue to be a part of our Pacific Northwest landscape. But both good science and dedicated people can ensure the home we know and love continues to thrive in the future, even as it changes.

Our guest blogger, Ryan Niemeyer is a Postdoctoral Research Associate in the Computational Hydrology lab in the department of Civil and Environmental Engineering at the University of Washington.