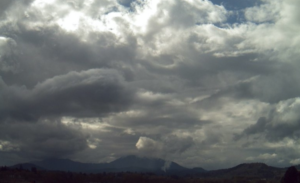 THE PACIFIC NORTHWEST has been in an historic drought for years. Nonetheless, if you ask someone on the East Coast to picture our region, they’re bound to conjure up images of thick flannel, immaculately trimmed beards, artisanal coffee, and, yes, rain, lots and lots of rain. These are tired stereotypes, but it’s no secret that Pacific Northwest winters can be very, very wet. This winter, however, soaks them all.

Some areas of the Pacific Northwest are seeing their wettest winters ever recorded. Portland and Seattle—the region’s vying hipster juggernauts—have both kept records at their airports dating back to 1938 and 1945 respectively.

Instruments at Portland’s airport have already registered an impressive 26.57 inches of rain for the months of December, January, and February. That’s more than 10 inches above average and about three and a half inches more than the winter of 1995–1996. Oregonians will remember that winter for the devastating Willamette River flood. While both winters contained leap years—and contained an extra day to make a run at the record—that didn’t matter; both winters locked up their records before the last day of February. Portland’s neighbor to the north tells a similar tale.

Instruments at the Seattle-Tacoma airport measured 24.63 inches of rain over the same December-January-February period. The Office of the Washington State Climatologist tells us that Seattle has, as of this writing, already received all of the precipitation it normally gets for the entire water year, which runs from October 1 to September 30.

So what does this mean? And, more to the point, is all this rain really a good thing? The answer you get depends on whom you ask.

Both Oregon and Washington saw floods, landslides, and road closures resulting from this winter’s deluge. But before you start thinking that we’re all washed up, there is a positive side: we’re a good deal less drought-stricken then we used to be. Drought has been eliminated from the western regions of Washington and Oregon, and has improved in eastern Oregon, Washington, and Idaho.

Our region’s mountain snowpack is looking much better this year than it has in years past. Last year at this time, that wasn’t the story. By March of 2015, it was already pretty clear that the clock was running out on winter and our mountains were virtually snow-free.

What followed was an abnormally warm spring and a dry, hot summer that stressed the Pacific Northwest’s water supply and soil moisture. This winter’s rain has helped, and the snow will help too. But the effects of drought can be long-lasting. Some parts of our region have been in drought conditions for three years and are working with big deficits. To continue to dig out of drought in those areas, we’ll need the rain to continue into the spring.

An enormous El Niño is responsible for blowing in this wet weather. But not all El Niños are alike, and sometimes seasonal outlooks miss the mark. Late last fall, models were saying that it looked like this winter was more likely than not to be dry in the Pacific Northwest. Obviously, that ended up not being the case, even though February was actually drier-than-normal across much of the region—including Oregon, Idaho, and eastern Washington

So where does this leave us? Should we feel cautiously optimistic for a better summer than last? And what would a La Niña next winter (as some have foretold) mean for our region? La Niñas tend to be cool and wet, but like we learned this year, sometimes anything goes.