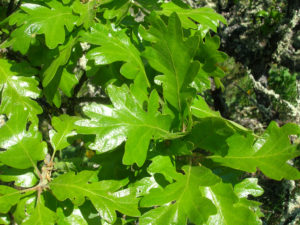 TREE MORTALITY EVENTS spotlight forests’ vulnerability to climate change, but most studies of forest vulnerability tend to focus on one or two economically important tree species or groups of tree species. The vulnerabilities of other tree or non-tree species are often omitted, along with the interactions among species. With so little information, managers of multiple-use public forests have a problem. A recent article in Climatic Change helps address the problem.

The study, the work of Michael Case and Joshua Lawler from the University of Washington, examines the vulnerability to climate change of 11 ecologically diverse species in western North America. The 11 species were selected by Case and Lawler because they were of interest to regional natural resources managers but are less well-studied than commercially important species, such as Douglas fir and Ponderosa Pine.

In their analysis, the researchers rated Garry oak—also known as Oregon oak and Oregon white oak, which currently ranges from California to British Columbia—as the most vulnerable because of its high sensitivity to climate changes (the tree is dependent on periodic, low-level fires that may be replaced by large, intense fires in the future) as well as the species’ low adaptive capacity (land-use change has limited its ability to disperse seeds widely). Big leaf maple, on the other hand, showed a low sensitivity to changes and a higher adaptive capacity despite a relative high degree of exposure to climate changes.

Case and Lawler conclude that this type of analysis might help managers design adaptation strategies to help make their forests more resilient to climate change. Chief among these strategies, note the authors, is assisted migration (also called assisted colonization), the intentional moving of plant and animal species to new habitats to help them adapt to temperature and other climate changes affecting the distribution of their ranges.

This study was supported in part by the US Department of the Interior Northwest Climate Science Center.

Editorial Note: For a look at how a forest type evaluation of forest vulnerability works, see our review of Oregon State University PhD student David Mildrexler and colleagues’ work.