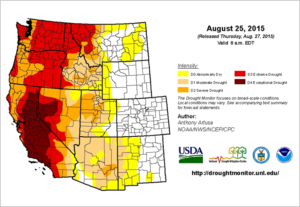 There is little doubt that last year’s high temperatures and water scarcity—because of the warm, low-snowpack winter—had a significant economic impact on Pacific Northwest agriculture. A Washington Department of Agriculture (WSDA) preliminary report places losses at approximately $325 million statewide, based on an initial estimate. These numbers will change as better data roll in. Meanwhile, a study by University of California–Davis researcher Richard Howitt and colleagues places that state’s crop revenue losses due to drought at $900 million. While I have not found similar reports for Oregon and Idaho, these two states also felt the drought, particularly in Oregon.In an earlier post I described how knowing that a particular year’s weather is representative of future climate projections can give us a good sense of what may be ahead. To the extent that this is true, then a better understanding of the impacts last year’s conditions had on agriculture can give us a sense of what we can expect as the climate warms. And the diversity of growers’ responses and how effective they were can give us ideas about what strategies to try as the climate changes.

Climate change was by no means the focus of the WSDA’s interim report. However, some of the authors’ findings are relevant to thinking about how to adapt our region’s agriculture to a changing climate.

Here are some of those findings, and the questions they raised in my mind: 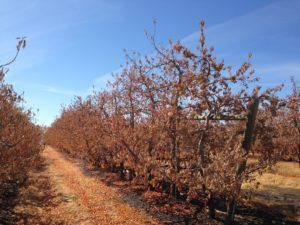 The WSDA report ends on a rather dire note, stating “Farming operations will struggle to stay solvent, despite their technological innovation and adapting practices, if climate and weather changes like those seen in 2015 become more regular.” The challenge before us is to identify the best innovations and adaptation practices, and be able to implement them with confidence as soon as possible, to avoid having this scenario come to pass.

What questions do these observations raise in your mind? Post them in the Comments box below, and we’ll tackle them in future posts on AgClimate.net.

2 thoughts on “Early 2015 drought loss numbers are coming in – Where is my crystal ball?”