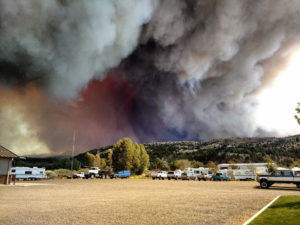 LAST YEAR DROUGHT killed some 12 million trees in California’s national forests, according to the U.S. Forest Service, while in Oregon and Washington over 1.6 million acres were affected by wildfires, according to Northwest Interagency Coordination Center. But what if managers had known beforehand which regions would be most vulnerable? Could some of the effects of these climate-induced catastrophes be avoided?

These questions are at the heart of a recent climate adaptation project led by Oregon State University’s David Mildrexler and colleagues. The OSU researchers, whose work was published in the journal Remote Sensing of Environment, have created what is, in effect, a detailed regional mapping effort showing where and how Northwest forests are likely to become vulnerable to drought and temperature stress. This creative cartography, the researchers hope, will help Northwest managers take strategic and preemptive conservation actions in forests at risk of climate-induced mortality.

Here’s the problem forests and forest managers face under climate change: Increasing global mean temperatures, changes in precipitation, and the hydrologic cycle are expected to lead to temperature and drought stress for many tree species. This is further expected to make forests more susceptible to wildfire and insect attacks. The projected result: widespread climate-induced forest die-offs, shifts in ecosystem structure and function, a concomitant loss of habitat for plants and animals, and the elimination of large carbon stores.

The researchers hope their project will help address these problems by giving land managers a tool to show where to focus their efforts. The first piece of Mildrexler and colleagues’ effort was the creation of a forest vulnerability index that, in effect, relates climatic drivers of vulnerability, such as extreme temperature and low precipitation, directly to physiological stress factors, which reduce photosynthesis and deteriorate forest health.

The researchers produced their index from satellite measurements of land surface temperature and the multi-year water balance defined as precipitation minus evapotranspiration. (Evapotranspiration is the process by which water is transferred from soil and groundwater to the atmosphere through plant transpiration—loss of water through foliage—and soil evaporation.) When temperature and water stress intensify over consecutive years, as they do in a multi-year drought, the forest vulnerability index increases.

Mildrexler and colleagues then mapped their forest vulnerability index over Oregon and Washington incorporating a decade of climate conditions. The resulting mapped index showed drier regions in the East Cascades and Blue Mountains becoming more vulnerable to mortality under recent climate conditions. Some wet regions have also become more vulnerable in recent years, including the western Cascades and the Oregon portion of the Coast Range.

Also of interest is how vulnerability broke down by species. Commercially important Douglas fir trees inhabit the vast majority of the researchers’ study region. However, only seven percent of regions occupied by Douglas fir showed increased vulnerability to drought and temperature stress. Ponderosa pines occupy the next largest portion of the study region, of which 33 percent showed increased trends in vulnerability. Ponderosa pines typically live in drier regions more susceptible to drought conditions.

Mildrexler’s forest vulnerability index and other tools for forest managers were developed by OSU’s Laboratory for Applications of Remote Sensing in Ecology.