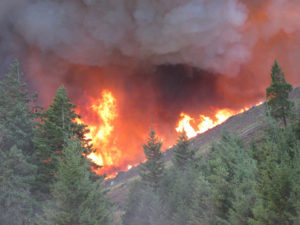 FIRES AND OTHER disturbances are the primary agents of ecological change in forests. Under climate change, forest fires are expected to grow both in frequency and size. One recent study examines what that means for the Northwest.

The study published in the journal Ecological Modeling comes from Tim Sheehan, Dominique Bachelet, and Ken Ferschweiler at the Conservation Biology Institute, a nonprofit environmental research group based in Corvallis, Oregon. The published work is one of several papers that have come from the CIRC and Northwest Climate Science Center funded project Integrated Scenarios, a collaborative venture that brought together scientists from five separate Northwest climate research organizations. The project’s goal was to explain what the latest climate science says about the Northwest’s future climate, vegetation, and hydrology. Sheehan and colleagues worked on the vegetation side of the puzzle.

To model the Northwest’s future vegetation under climate change, the CBI researchers employed a “dynamic general vegetation model” (DGVM) called MC2. Their conclusions: fire will become more frequent, and the vegetation that grows back could be quite different from what was there before it burned.

DGVMs like MC2 are designed to represent how vegetation types change over time—hence, “dynamic.” Luckily, to do this you don’t need to account for every single shrub and tree out there, or even every species. Instead, the modeling approach in a DVGM groups species of vegetation into types. For instance, in the case of MC2, Sheehan and colleagues grouped vegetation in their modeling into 36 vegetation types, of which (because this is a global model after all) only 14 grow in the Northwest’s temperate zone. The team then looked at how changes in climate might alter that vegetation. That change, according to the researchers, will take three forms: it will come as a disturbance from a wildfire or other disruption; it will come as the region’s climate gets too warm for its current vegetation; or, it will come as a combination of the first two factors.

Researchers have known for a while that as the planet warms under climate change, plant species in the northern hemisphere are responding by moving to higher latitudes and higher elevations. Researchers have also known that fires tend to increase under greater climate warming. Just how much warming will occur depends on how much CO2 and other greenhouses gases continue to be pumped into the atmosphere. And therein lies a lot of uncertainty.

To account for that uncertainty, Sheehan and colleagues ran MC2 using two emissions scenarios, RCP 4.5 and RCP 8.5, a middle of the road scenario (with moderate warming) and a high emissions scenario (with much more warming) respectively. To account for local topography and climate, the team used data from a downscaling method developed by CIRC researcher John Abatzoglou called MACA. (Downscaling is a means to increase a model run’s “resolution” by making global climate model data statistically fit with local geography and climate features.) MACA was used to downscale a total of 20 climate models. Multiply that by the two emissions scenarios and you get 40 future scenarios. To help the researchers account for another part of the uncertainty problem, Sheehan and colleagues also ran each climate future with and without fire suppression. The fire suppression module used by the researchers limited the area burned in a given grid cell, unless simulated conditions were conducive to a really big fire.

While initially starting with the Northwest, the CBI team went on to map the continental U. S., simulating future climate and vegetation changes for the region to the year 2100.

The researchers’ simulations revealed that with the warmer, drier summers expected under future climate change, fires across the U.S. will become more frequent. This was especially true for the previously soggy, wetter western part of the Northwest west of the Cascade crest. There, the researchers’ simulations showed robust increases in area burned each year, from roughly half a percent in the 20th century to 1.5 percent for this century. If that doesn’t seem impressive, then consider this finding. Sheehan and colleagues’ simulations showed that given the right conditions a single year of fire could account for as much as 30 percent of the area burned. (Keep in mind this is a simulated event happening in a model based on probability, not a prediction of when the event will actually happen.) The message is clear: if the climate warms enough, big fires are likely to produce big changes in relatively short order.

Along with the increase in area burned is a corresponding reduction in the fire return interval from roughly 80 years in the 20th century to between 47 and 27 years in this century. The larger percentage of area burned and shorter return interval occurred in the simulations under the high emissions scenario, RCP 8.5, without fire suppression. Whereas the most favorable result occurred when the researchers ran the milder emissions scenario RCP 4.5 with fire suppression. As for the total area affected by fire changes, in the 20th century it’s mostly in the southern Klamath region and parts of the Cascades, but in the more extreme scenarios most of the area experiences extensive wildfires. The exception was the coast and high elevations.

At the other extreme, in the dry part of the Northwest (eastern Washington and Oregon, and southern Idaho), Sheehan and colleagues’ simulations indicate little change in fire area burned or increase in fire frequency as the climate changes, but fire suppression has a large effect.

The researchers also noted changes in the Northwest forests of conifer and broadleaf trees. Mirroring past projections by other researchers, tree types now common to parts of California are expected to migrate north.