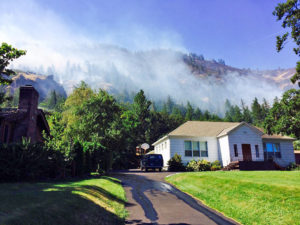 Smoke from the Rowena Fire behind homes near the Columbia Gorge along Highway 30, August 2015. (Photo: Oregon Department of Forestry, some rights reserved.)

AS WE WROTE in the October issue of the CIRCulator, wildfires are expected to grow in size and frequency under climate change. (See “Large Wildfires Expected Under Climate Change.”) Consequently, there’s considerable interest in finding ways to encourage homeowners to take preventative measures on their property—such as removing vegetation that’s close to their homes.In a recent paper published in the journal Environmental Hazards, a group of researchers from the University of Colorado, Boulder, set out to discover if acceptance of human-caused climate change increased homeowners’ likelihood to take action against wildfires. What they found seems counter intuitive: not accepting the evidence for climate change correlated to an increase in the likelihood that homeowners had taken actions to mitigate wildfire risk.

The researchers asked Colorado homeowners whether they had taken any of 17 wildfire mitigation actions on or around the edges of their property. These actions ranged from short-term measures—like the aforementioned vegetation removal—to full-on structural improvements—such as changing roofing and siding materials—to lower the chance of their homes going up in flames in a wildfire. The researchers than compared the homeowners’ responses to their understanding of climate change science. What they found is a head scratcher.

Generally, the survey revealed there was little correlation between the respondents’ understanding of the science behind human-induced climate change and whether or not they took steps to mitigate wildfire risk on their property. This held true except for 39 of the survey’s 375 respondents. These 39 outliers believe climate change is a hoax. They also reported significantly more wildfire mitigation actions than the other respondents.

Believe it or not, this study is not the first to show results like these. Previous research has shown that awareness in the increased risk of wildfires as a result of climate change does not increase the likelihood that a homeowner will take actions to mitigate the risks to their property. Instead, other values, such as a sense of community and place, are a greater determinant of whether someone will choose to take action.

The researchers conclude their study by recommending that, contrary to popular wisdom, focusing investments on hazard mitigation without overtly referencing climate change may in fact spur greater behavior change among more skeptical populations. In other words, those in the climate adaptation community might need to occasionally read the room, so to speak, in order to see results that protect people and property from climate change impacts, rather than try to convince climate deniers that climate change is real. At the same time, the researchers didn’t let those who accept the evidence for climate change off the hook. Instead the researchers recommend those in the adaptation community need to come up with better means to incentivize them to take concrete steps at the local level to protect themselves from hazards.