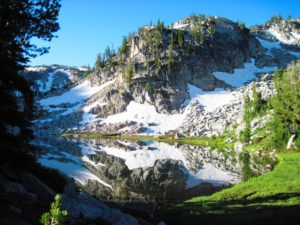 RANGING IN ELEVATION from 267 to 3,000 meters (roughly 875 to 10,000 feet) and nestled in the corner of northeast Oregon and southeast Washington, the Blue Mountains are a collection of small mountain ranges that comprise a rich, complex ecosystem of forests, streams, and snow-capped peaks. As with other mountain ecosystems in the U.S. West and Northwest, the Blue Mountains face impacts from a warming and changing climate that threatens to lower snowpack and increase the risk of wildfires.

The U.S. Forest Service is responding to these and other climate threats to the Blue Mountains with an ambitious effort called the Blue Mountains Adaptation Partnership, or BMAP. Recently project mangers for BMAP released a comprehensive climate assessment and adaptation plan for the mountain ecosystem. Here are some of the highlights from the study’s findings on impacts and possible adaptation strategies.

As with other mountain ecosystems across the U.S. West, the Blue Mountains’ climate change impacts revolve to a large extent around how a warming climate is expected to change the region’s mountain hydrology. Compared to the historical record, temperatures in the region are expected to be anywhere from 3.2° to 6.3° Celsius (5.7° to 11.3° Fahrenheit) warmer by the year 2100, and 2.4° to 3.1° C (4.3° to 5.6° F) warmer by the middle of this century. This increased warming is expected to make it far more likely for precipitation to fall as rain instead of as snow, producing far-reaching effects ranging from washed out roads to making streams potentially too warm for salmon as well as leading to especially dry summers that are expected to greatly increase the likelihood of forest fires. For each impact they note, the researchers proposed a series of adaptation strategies.

Within their boundaries, the Blue Mountains contain three national forests, Malheur National Forest, Umatilla National Forest, and Wallowa-Whitman National Forest. Starting roughly two years ago, representatives from these forests teamed up with researchers from CIRC, the University of Washington, and the U.S. Forest Service Pacific Northwest Station, including Jessica Halofsky, the BMAP report’s lead author, and research biologist Dave Peterson, to create a comprehensive climate change assessment and adaptation plan for the forests. Peterson is this month’s featured researcher.