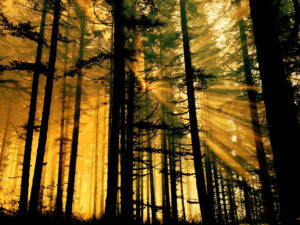 FORESTS’ ABILITY to “breathe in” carbon dioxide (CO2) is widely understood to act as a kind of offset or buffer to human-caused climate change. Put simply, forests are essentially picking up the slack—at least some of it—for our heavy carbon-emitting lifestyles. However, forests’ capacity to act as carbon sinks isn’t an absolute given.

Forests are vulnerable to all kinds of disturbances, from wildfires to the regular harvesting of trees for timber, and this can affect their ability to store carbon. What’s more, researchers are only now beginning to grasp what disturbances mean for carbon cycling at the regional level. (Broadly speaking, the carbon cycle constitutes the uptake, emission, and exchange of carbon between the biosphere—plants, animals, and microbes—and the atmosphere.) Recently, researchers tackled this brainteaser for one Northwest ecoregion.

The ecoregion was Oregon’s West Cascades, the state’s heavily forested, mountainous zone on the west slope of the Cascade Mountains. The researchers were led by Oregon State University’s David Turner, a member of the Department of Forest Ecosystems and Society and a former CIRC researcher. Effectively, Turner and colleagues mapped the ecoregion, tracking recorded disturbances in the region’s forests for the years 1985 to 2010. The team’s mapping was achieved using satellite observations from the U.S. Geological Survey’s Landsat—the world’s longest running, spaced-based remote sensing project. (Turner’s other recent project employing similar techniques was reviewed in the November 2015 CIRCulator.)

Disturbances to the forests that occurred during the historical period (such as the 1990s’ western spruce budworm outbreak) were quantified in Landsat’s LandTrendr database, which classified disturbances in three categories: wildfires, harvesting, and pests and pathogens, the latter considered as a single combined disturbance type. To calculate the relative impact of each disturbance on the carbon cycle, Turner and colleagues employed a computer-modeling program based on the Biome-BGC carbon cycle process model. This produced several distinct and interacting “carbon fluxes” in West Cascade’s carbon cycle that the team could then use to assess the strength of each recorded disturbance and rank them accordingly. What they found is perhaps surprising.

For the years 1985 to 2010, the most frequent disturbance was tree harvesting, followed by wildfires and then pests/pathogens. The good news is the majority of the time—as measured by a factor called net ecosystem production—the forests of the West Cascades took in more carbon then they emitted. This was true even after accounting for harvest removals from the forest. However, in relatively warm, high fire years—as measured by a factor called net ecosystem exchange—the forests of the West Cascades can emit more carbon then they take in. In warm years, tree productivity tends to decrease and fires emit CO2. Nonetheless, harvest removals from the forest generally had a larger impact (four times greater) on the carbon cycle than fire emissions, according to the researchers’ results.

Turner and colleagues’ work was published in the journal Carbon Balance and Management.