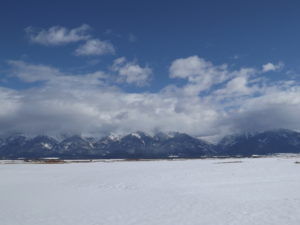 CLIMATE CHANGE is expected to influence where and how much snow will blanket our future winters. This change, says a new study, is already happening.

The study, published in the Journal of Climate, examines on-the-ground measurements of snow cover in the continental United States over the last 60 years. The annual number of days with snow cover in the U.S. has already been declining, the study’s author concludes.

The study, the work of the U.S. Geological Survey’s Noah Knowles, looks at snow data for the years 1950 to 2010 from the National Weather Service Cooperative Observers (COOP), a network of citizen-based weather monitoring observations across the U.S.

The study concludes that the annual loss in the total number of snow cover days is occurring mostly in November (when snow typically arrives for much of the country) and March (when snow typically melts in much of the country). The result for the two months shows up as an overall shortening in the snow season and a decline in the number of days with snow. This trend is seen strongly in the Pacific Northwest, where rising temperatures have led to less snowpack.

Editorial Note: Although COOP datasets severely under sample higher elevations prevalent in the west, higher altitude studies using snow course data have documented warming-induced declines in snow related quantities across the west, particularly for the Pacific Northwest. This includes OCCRI Director Philip Mote’s 2005 study that found declining snow water equivalent in western North America from 1950 to 1997. (Snow water equivalent is the amount of water that would result if the measured snow were melted.)