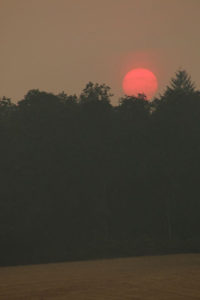 THESE DAYS the vegetation of Oregon’s economically important Willamette River basin is a mix of grasslands and croplands along the Willamette River Valley floor and coniferous forests in the uplands. These higher elevations are important for local forest industries. Under climate change, rising temperatures are expected to create less favorable climate for existing vegetation types while increasing the frequency of forest fires. The result: Climate change may be a significant factor in how and whether forests get harvested in the region.That, in a nutshell, is the conclusion of a recent study led by CIRC researcher David Turner of Oregon State University. To reach their results, Turner and colleagues—which included OSU’s David Conklin and OSU and CIRC researcher John Bolte—created a computer-based landscape simulation model of the Willamette River basin. This was done using satellite observations from the U.S. Geological Survey’s Landsat—the world’s longest running, spaced-based remote sensing project. The observations were used to create the model’s initial conditions. This information was fed into the dynamic global vegetation model MC2 and the landscape simulation model Envision, producing a series of projections for vegetation change in the basin to the year 2100.

To account for climate uncertainty (how much CO2 might be added to the atmosphere by the end of this century, how responsive the climate system is to that CO2, and, hence, how much warmer things might get), Turner and his colleagues relied on climate researchers at CIRC and OCCRI who selected a series of representative climate scenarios that, in effect, represented possible futures of low, medium, and high levels of warming. (For more on this see, “Putting the Sensitivity Approach into Practice for WW2100” in last month’s CIRCulator.) From these climate scenarios Turner, Conklin, and Bolte modeled how vegetation might be expected to change under each possible future and how humans might respond to those changes. Here’s some of what they found.

In their simulations, the researchers found wildfires increased in frequency as temperatures rose. This happened by 3 to 9 fold relative to the historic period for the medium and high warming scenarios. Only the low climate scenario was the outlier, with the frequency of fires registering slightly below historic records. Under the high warming scenario, wildfires tended to clump together in years, with as much as 25 percent of the forested area burning in one extremely high fire-year late in this century. The take home message: big fires could produce big changes in relatively short order.

As we’ve written about in past issues of the CIRCulator, plant species in the northern hemisphere are moving to higher latitudes and higher elevations in response to a warming climate. As with wildfires, the vegetation shifts simulated by Turner and colleagues tracked closely with temperature gains, with the biggest shifts occurring under the most warming. Here’s what that change might look like:

Today, the Willamette River Valley’s mid-elevation forests are dominated by Douglas fir and western hemlock. Under the researchers’ simulated climate changes, these forests transitioned to a mixed forest where species such as bigleaf maple and grand fir increased in dominance. At the basin’s lower elevations, vegetation shifted from maritime conifer forests to subtropical mixed forests of conifer and broadleaf species. Likely climate beneficiaries in the basin are species such as Pacific madrone and tanoak, now commonly found in the Coastal Mountains and Sierra Nevada Mountains some 800 km (500 miles) to the south, the researchers conclude.

Take these finding together and it’s no surprise forest harvesting in the Willamette River basin is going to change in the future. The biggest factor in this change will be wildfires, which the researchers conclude is expected to ultimately decide if forests can grow old enough to be harvested.

For a number of factors—including the current age of the forests—harvest rates were maintained in the low and medium warming scenarios on both private lands (at a 1.5 percent rate of the area per year) and public lands (at a 0.5 percent rate per year). However, under the high warming scenario as the simulations got closer to the year 2100, harvesting rates began to decline on private forestland. Overall, the researchers conclude that wildfires are expected to decrease the age of the basin’s trees (as measured by mean stand age), greatly affecting harvest rates.

Turner and colleagues end their paper by calling for a reexamination of current harvest practices, suggesting under a warmer climate, harvesting trees on private lands at around 40 years, rather than the current 45-60 years, could be one way to adapt to the coming disruptions.

Turner, Conklin, and Bolte’s research was done as part of the Willamette Water 2100 project, an ambitious effort to model how changes from climate to population growth will affect the Willamette River basin until the year 2100. The project is funded by the National Science Foundation and CIRC, and is a joint effort between researchers at three Oregon universities, as well as UC Santa Barbara. The researchers published their work in the journal Climatic Change.