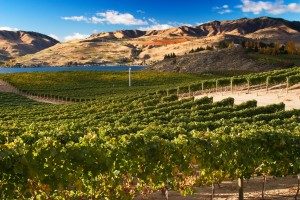 Wine grapes; a crop of growing importance in eastern Washington that tolerates drought better than other important crops. Photo: A. Simonds

As I shared in my last post, “Climate is what you expect, and weather is what you get.” But if the climate is changing, and part of what experts predict is that we’ll see more extreme weather and weather-related events—think floods, droughts, big storms—what should we expect?

More than one research group is working hard to develop models that can help answer this and other questions. They are also working to collect real-world data against which to compare the model projections, to improve our confidence in what these models tell us. It is this combination of data and good models—models that do a good job at representing what actually happens in the real world—that would allow us to say to what extent a particular event is due to a changing climate, and how much is just the natural, year-to-year variability that we are all used to experiencing.

Attributing causes is a tricky business —and not only for weather events. Think of what is known about coronary heart disease. Experts can tell you what the risk factors are: high blood pressure, high cholesterol, poor diet, smoking… And they have tools to calculate your risk of a heart attack. But if you had a heart attack, could they say it was specifically because of your diet? Or your blood pressure? That’s much harder to do. Yet that doesn’t mean you ignore the risk factors, especially if you’ve already had a heart attack. Same thing with weather and climate: we are likely to see more extreme weather events, but is a particular event due to a changing climate? And should you care if we don’t know for sure?

My colleague Georgine Yorgey discussed efforts to link extreme events to climate change in her blog post a few years ago, after a year plagued with reports of heat waves, drought, and wildfires in other parts of the world. She reported on a project led by David Rupp and Phil Mote at Oregon State University’s Oregon Climate Change Research Institute (OCCRI), examining the likelihood that changes in greenhouse gases—the driver of human-caused climate change—led to the 2011 heat wave and drought in Texas.

Researchers are still debating approaches to attributing extreme weather to climate change. A recent Perspective paper in Nature Climate Change, specifically intended to stimulate discussion among experts, caught my attention. The authors argue that though we may not yet have the tools to accurately attribute extreme events like Superstorm Sandy (2012) or the Boulder floods of 2013 to a changing climate, we do have the tools to understand what conditions contributed to these events. We can also say whether we can expect those conditions more frequently as the climate changes. 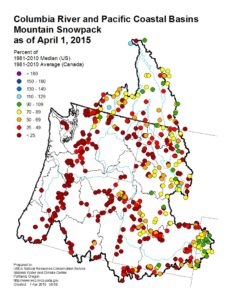 How can these conclusions help us in the Pacific Northwest? Take this year, for example: the snowpack on the Cascades was amongst the lowest ever, and June temperatures reached record highs. Cliff Mass, Atmospheric Science Professor at the University of Washington, describes this year’s weather conditions as “stunningly close to those expected to be normal by the end of the century.”

What good does it do to know that what we saw this year is a good example of what we’ll see in 85 years? It gives us an opportunity to practice, practice, practice. Or, in Dr. Mass’s words, it is a virtual climate stress test. We can evaluate how well we did this year—in balancing the many needs for water from the Columbia River and its tributaries, in adjusting the crops we grew, in preparing for wildfires, in helping communities affected by the weather and resulting events. And we can evaluate where we failed the stress test, and work out how to improve before such conditions become the norm. This practice run is particularly important if what needs improvement is structural—irrigation infrastructure, whole subsectors of agriculture—which cannot easily change overnight.

In the end, if we understand that our weather today can represent the weather that climate change will bring more of—even when we cannot say if today’s weather is due to climate change—we can learn how to best adapt now, and be better prepared for the future impacts of a changing climate.