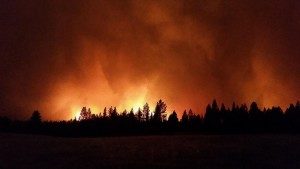 A concerned citizen wrote a letter to the editor of my local paper recently, complaining about how weather, climate, and climate change had been used almost interchangeably. Reading that letter got me thinking about the active scientific discussion on whether extreme weather or weather-driven events like floods and wildfires—the latter very much on our radar in eastern Washington this year—are due to climate change. And more importantly, it got me thinking about how to best take advantage of what we know, even when there are some complex issues we still don’t fully understand. Here I tackle the difference between weather and climate, and in a future post I will discuss what we know—and don’t—about climate change impacts and how what we do know can be useful.

As most people learned in middle school (and as the Climate Impact Group’s webpage defines), weather describes the conditions—temperature, sunshine, rain, cloud cover, winds, hail, snow, etc.—at a specific place at a specific point in time. Climate, on the other hand, is the average pattern for weather over a period of months, years, decades, or longer in that specific place. You’ll note that “weather” is part of the definition of “climate,” a clue that they are intricately related. To describe the climate in Wenatchee, for example, you accumulate information on the weather—day by day, year by year—and synthesize it into, for example, average temperature and precipitation for each month of the year. 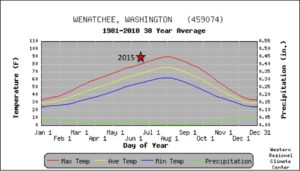 Or, as the UW Climate Impacts Group notes, “climate is what you expect, and weather is what you get.” If you visited Wenatchee on a June day this year when temperatures were at record highs—maximum temperatures averaged almost 89°F, the highest since 1931 when records started (click on Monthly Temperature Listings, Average Maximum)—it wouldn’t necessarily give you very good information on what has occurred in the past or about what to expect in future years. On the other hand, if you’ve visited Wenatchee in June every year for the past 10 years you’d know that the maximum June temperatures average about 78°F: you’ve accumulated enough information to describe a component of Wenatchee’s climate.

This accumulated knowledge should give you a better idea of what to expect in future June trips… though you still don’t know exactly what you’ll get.

So June temperatures this year hit record highs. And higher temperatures characterize climate change. But Wenatchee has had other years with near-record high temperatures in June: 1948, 1986, and 1992 all hit highs of 102°F or more (107°F in 1992), and maximum temperatures averaged close to 87°F (Monthly Temperature Listings, Extreme Maximum and Average Maximum). So are this year’s temperatures due to climate change? Should you care if they are or they aren’t? Stay tuned for a future post discussing these questions and, in the meantime, enjoy the beautiful but warm fall weather in Wenatchee.