High value tree fruit may get priority when it comes to water in drought years. Photo: L. Seaton

As this hot, dry summer winds down across Washington State, many areas are continuing to struggle with the impacts of drought. (Those who would like a recap of August weather and drought conditions can see the WSU Drought Report here.)

Unfortunately, while the weather has become more fall-like, with welcome rain in some areas, all climate indicators point towards increased chance of warmer and somewhat drier than normal conditions through mid-2016 – as shown in the three month forecast from the Climate Prediction Center (see the maps below). Indicators consistent with this forecast include recent observations of a strong El Niño, forecasts of an 85% or greater likelihood of El Niño persisting through next spring, and a positive Pacific Decadal Oscillation (PDO) signal[1]. Together, this all points to a likelihood of reduced snowpack this winter – and limited water availability again next summer and fall. 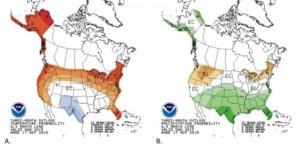 This forecast has added some urgency to ongoing discussions about whether impacts could be lessened by making adjustments in drought response strategies.  Anticipating drought conditions and having mitigation options in place earlier –even before drought conditions are on the horizon – is one possible change that is being discussed.

An example from 2015 suggests why this might be helpful. In the Yakima Basin, one strategy that has been used to manage drought impacts, both this year and previously, is for water to be leased from some farmers (essentially, paying them not to use the water they are entitled to). Depending on the specific arrangement, this water is then used either to irrigate higher-priced or more vulnerable crops (such as tree fruit) or for instream flows (keeping water in the rivers) that support fish.

However, it has generally been more difficult (and more expensive) to lease water this past year than during previous droughts in Washington. There are many factors contributing to this. Some farmers who used to grow hay (and thus might be good candidates for leasing their water) are now growing crops such as silage that are under contracts to dairies – and they are unwilling to break these contracts in order to lease their water during a drought. Other farmers who might potentially have been willing to fallow and lease their water had already planted this year by the time that active leasing started. Because they had thus incurred much of the cost associated with farming, they weren’t willing to lease their water to someone else.

While it may be difficult to change market conditions that have resulted in farmers growing crops under contract, it may be possible to encourage farmers to include drought contingencies in those contracts – especially when they are negotiated during times when forecasts indicate a high likelihood of water limitations.

It may also be possible to get leasing programs up and running earlier – which might encourage more farmers to participate. In other areas of the country, there has been movement to facilitate or arrange these leases before there is a drought, with pre-arranged, long- or short-term “dry-year” contracts when prices may be lower, and when there is less time pressure. Then, when drought conditions occur, these arrangements are already in place, reducing uncertainty about drought outcomes, and helping make sure that water moves to the highest valued use when it’s needed most.

Moving this discussion forward, identifying barriers to successfully implementing such tools, and working to address those barriers, may be increasingly important given that the future may include more frequent years in which late summer water availability is limited because of warmer winter temperatures.