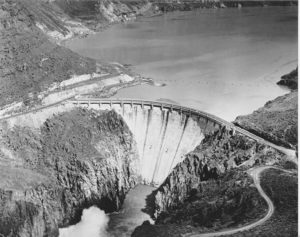 Unless you have been living under a defunct tractor with feral cats for the last 10 months, you know it’s not a good news year for anything related to water. Despite this, a few weeks ago I traveled to Malheur County in eastern Oregon looking for ‘success stories’ growing up through the cracks while gathering footage for a film that CIRC and Oregon Sea Grant are producing to document this year’s drought. On the one hand, there is no shortage of examples of how the prolonged drought – three years and running – has impacted eastern Oregon. The Owyhee Reservoir carries over 700,000 acre feet of active storage for irrigating crops, usually amounting to more than a two year supply for production in the Treasure Valley along the Snake River that divides Oregon and Idaho. In 2013, the reservoir failed to fill and supplies were exhausted, then it happened again in 2014, and is becoming something of the norm this year, with just five percent of active storage remaining at the beginning of August. Take any of these years and the impact of the drought is on par with other bad years, 1977 and 1992 come to mind, but consider the failure to fill four years in a row, and the drought’s impact on the Treasure Valley is unprecedented in a history that goes all the way back to 1932.

Death by a Thousands Cuts

The impact of consecutive drought years is not one acute or catastrophic event. Instead it is a series of chronic and painful jabs likened by Kelly Redmond of the Western Regional Climate Center as getting run over by a steamroller an inch at a time. First, growers get a lot less water, about one third of their normal water allotment for those on the Owyhee project. Second, a lot of fields are fallowed so that water can be concentrated on producing fewer but higher value crops like onions or sugar beets. Bill Buhrig, an OSU Extension Crops Agent in Malheur County, and my tour guide last month, estimated that 20% of the valley’s farm acres were taken out of production this season. This alone might be challenging enough, but thirdly, you also need to consider that a one third allotment doesn’t necessarily get spread over the course of the whole growing season. Translation: crops need to be ‘finished’ when the water is finished, which this year is likely early August, about six to eight weeks early, depending on how far that remaining five percent of storage can be stretched.

Where are the Success Stories in this?

On the other hand, dealing with a drought for three years and running provides ample time to reflect on what is working and what can go by the wayside. First, one has options in what to put into the ground. From what I was told, early maturing crops like wheat and barley are a middle ground between fallowing and the risk of running out of water on fields with high value row crops. Seed crops are another option because they don’t need water through the end of the season, important in years like this when the spigot runs dry weeks to months early. Second, one can invest in infrastructure improvements, things like drip irrigation, and over the long term, automating head gates and converting leaky irrigation ditches to pressured pipes. Drip irrigation is a lot like it sounds. Water is pumped through a series of filters and then pushed through small black tubing buried in the crop rows with small perforations every 8-12 inches that allows water to ‘drip’ – thus the name – into the soil surrounding the crop. The result is an incredibly efficient, on the order of 90 percent, delivery of water directly to the plant. Contrast that to traditional irrigation approaches such as flood or furrow irrigation that siphons enough water out of the ditch for it to flood the crop rows and spill off the other end of the field. To be fair, conversions from flood to drip irrigation began well before this drought in an effort to avoid soil runoff and water quality problems that had been mounting in the area. Yet, the technology has been slow to catch hold because of expenses related to the pump-filters and the labor required to replace the drip line each season. The drought seems to have tilted that equation. While having lunch in one of the local cafes, two farmers, father and son, joined us and told me that two years ago maybe 20 percent of their onions were irrigated with drip lines. Last year it was probably closer to 40 percent and this year around 65 percent.

It’s hard not to be even more impressed by efforts to improve the efficiency of water delivery to farms. Jay Chamberlin, manager of the Owyhee Irrigation District explained that over the last several years, they have invested in automating delivery devices that moderate flow in their main irrigation canals. In contrast to gates that are manually open or closed to meet downstream demands, these automated stations are constantly monitoring and adjusting the flow of water to meet the operating targets of that particular day. Perhaps most impressive of all is the Vale Oregon Irrigation District, a smaller ditch company serving the northwest side of the Treasure Valley, which as made a nearly zeal-like effort to convert it’s open irrigation ditches to gravity pressurized pipes.

Over the last several years, the Vale district has installed more than 50 miles of pipe to channel water from the system’s main canals to fields in the area. The advantages of this are numerous. Most notably, piping virtually eliminates conveyance loss – the amount of water lost between point A and point B in a system as a result of things like groundwater seepage or evaporation. Second, harnessing the gravity of even a gradual elevation loss over many miles is enough to pressurize lines and give growers a sort of ‘on-demand’ access to water with the turn of a valve. Compare this to an open ditch system where head gates are open many miles away and the water creeps down slower and slower as each farm draws on it until supplies finally reaches the last farm in the system. This delay can be compensated for by ‘pushing’ more water through the canals and ditches to speed up the process but of course can lead to excess water passing through the system, or result in unreliable surges and stops on the farmer’s end. Finally, the last advantage I’ll mention is that pressurized pipes make it possible to convert to other efficient irrigation systems like drip lines or center pivots without any need for pumps. In fact, the pressure generated off the 278 ditch recently installed by the Vale district was over 100 psi, more than enough to blow a center-pivot’s end gun sprinkler onto the county road, so pressure regulators of some kind are required.

What Exactly Does this all Amount to?

Take all of these investments together – the canal automations, piping, and on farm efficiencies of drip and center pivots – and there is no doubt that water is being stretched a little further. While it’s difficult to put any hard numbers to that, absent a formal analysis, local knowledge ball-parks that they may be adding an extra week or two, possibly even three weeks to the tail end of their irrigation season. When considering that some crops are failing in the absence of just one more week of water, these savings are more than a drop in the bucket. Whether that number actually turns out to be one day or one month, the point here is this: Silhouetted against a backdrop of bad news are the traces of what seems to be progress, dare I say, success stories, that may even inspire a little optimism in a year filled with images of empty reservoirs and dry ditches. Add to this bad news climate projections that call for warmer winters and less snowpack and these strategies start to look like the way forward rather than novel efforts to get through a few bad seasons.

As we wrapped up the week, Bill and I spoke a little about what future might look like for the valley if the drought persists in coming years. We concluded that there’s still a long way to go on water efficiency and cropping systems but that ultimately they have a good start. After a few moments of silence Bill says, “You know John, farmers are eternal optimists, if not we would have gotten out of this business a long time ago.”