By: Liz Whitefield and Kaitlin Miller

Whether the cows are raised on the east side of Washington State or even the traditionally cooler west of the Cascades during the summer months; it is important that animals are kept comfortable in high temperatures to prevent them from stress and ultimately, losses in milk production and reproduction rates. Washington State ranks 4th in milk production per cow for the U.S., and ranks 10th in total milk production (USDA, 2014). Over 6.5 million pounds of milk is produced annually from Washington’s 400+ dairy farms totaling around 273,000 cows. The state’s dairy industry is dependent on healthy productive cows even with these record high temperatures this summer. The estimated yearly cost in the U.S. from cows affected by heat stress was about $2.4 billion with minimal heat stress abatement practices in place approximately 10 years ago. This economic impact can only expected to be much greater today. When heat stress abatement measures are implemented on dairies, there is a significant improvement in health and a significant economic reduction ($1.7 billion; St. Pierre et. al. 2003).

Heat stress can occur in dairy cattle when the effective temperature conditions exceed the animal’s zone of thermal comfort. In addition, a changing climate can further complicate the prolonged periods of high temperatures. Under heat stress, cows experience elevated body temperatures, increased respiration rate, reduced dry matter intake, decrease in milk production of 10 to <25%, and decreased reproductive performance (Chase, 2012). Heat stress can be determined through temperature-humidity indices (THI) which are calculated using ambient temperatures and relative humidity. Heat stress has been historically known to begin when the THI is 72 and above: however, due to more recent research, heat stress has been observed to occur at a THI of 68 (Collier et al, 2011).

The Pacific Northwest tends to differ from the rest of the country when it comes to climatic trends: while some states experience year-long droughts or extreme storm events, Washington State tends to experience somewhat mild farming conditions. To assess how Washington’s dairy industry has been affected by increasing temperatures, the daily THI values per day were calculated for three dairy populated locations in the state: Lynden, Snohomish, and Sunnyside. Using a THI value of 68 as the threshold for heat stress in dairy cattle, the daily THI value was averaged from 2008-2014 to act as a previous comparison when compared to 2015, one of the hottest years on record for the state of WA. 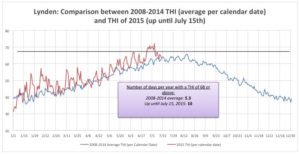 Similarly, Snohomish has already reached its typical average annual total days (4) where the THI has exceeded 68, only halfway through the summer months (Fig. 2). 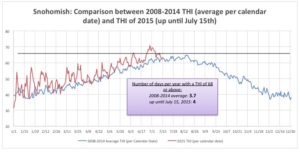 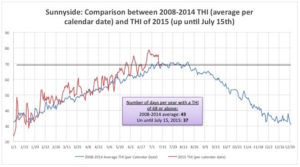 Washington’s dairy industry is at risk of severe economic losses from heat stress this summer. In order to reduce milk production and reproduction losses experienced as a result of heat stress, farmers, consultants and advisors must recognize the importance of cooling strategies and on-farm heat abatement measures to adapt to a changing climate. Common examples of heat abatement adaptation measures could include installing effective and efficient fans, shades, and sprinkler/soaker systems. Other strategies include feed rationing, ensuring an adequate supply of fresh water, reducing time of cows in holding areas (Chase, 2012). If 2015 continues to demonstrate record breaking temperatures with overnight temperatures staying comparably high, worst case economic scenarios could become a reality for WA dairy farms.

If you are interested in learning more about heat stress in dairy cattle and adaptation measures, be sure to register for the free, self-paced animal agriculture and climate change online course where you will find videos, articles and custom information on the important topic. www.animalagclimatechange.org/register

Interested in the relationship between climate change and animal agriculture? Visit www.animalagclimatechange.org.