In this installment of the scenario planning series we’ll turn to a Pacific Northwest-specific application of shared socioeconomic pathway (SSP) storylines. Professor John Harrison and graduate student Will Forney, of WSU Vancouver’s School of the Environment, made time to talk with me about the work their lab group is doing to adapt global scenarios to be regionally specific in order to investigate connections between water quality, social and economic changes and decisions about wastewater treatment and land use.

Within the climate change research community, there is an opportunity now to reassess and innovate how climate scientists are “doing scenarios.” As discussed previously in this series, the IPCC’s approach is evolving to present climate change projections in terms of Representative Concentration Pathways (Part 2). At the same time, detail-rich global storylines describing possible social and economic changes have been developed for use in a variety of planning contexts (Part 3). Innovative work that’s happening currently includes applying scenarios to study sector-specific impacts, moving beyond climate to consider other natural resources such as water, and making future projections at finer spatial scales.

WSU environmental scientists are adapting global-scale, SSPs to consider possible realities of Pacific Northwest water quality that may come to pass in the future. The impetus for this work began when Professor Harrison was working with colleagues while on sabbatical at Utrecht University in the Netherlands. With Utrecht-based colleagues, he co-authored a paper connecting social and natural factors to river export of nutrients, including nitrogen and phosphorous, using the Global Nutrient Export from Watersheds (NEWS) model. The paper compared past and future nutrient export trends based on four Millennium Ecosystem Assessment (MEA) scenarios, a precursor of global SSP scenarios. Regional nutrient export was highly variable, for example in a scenario called “Global Orchestration,” which describes a reactive approach to environmental problems, Southeast Asia was projected to contribute half of the global total nutrient export between 2000-2030. For each of the scenarios population change was an important driver of nutrient export shifts. An overarching finding was that the risk of coastal eutrophication is expected to increase in most of the world due to increasing nutrient export and changing ratios of nitrogen, phosphorous, carbon and silica.

Understanding more about how coastal ecosystems may be affected by patterns in nutrient export over time is clearly vitally important. But there is a lack of modeling research that considers drivers of change and water quality impacts at a spatial scale that is fine enough to be directly relevant to water resource decision makers at regional, state and local levels. Over the past year, using MEA and SSP storylines as starting points, Will Forney and John Harrison have worked to draft regional storylines that give dimension and detail to two possible directions of change in the Pacific Northwest. A “sustainability” scenario describes economic growth with low material intensity and a trend toward greater economic equality and human well-being, coupled with increased investment in and rapid development of green technology that can improve adaptation and mitigation capacity to climate change. A “fragmentation” scenario describes increased economic inequality in the region, lower water resource security, and less organized, environmentally focused land use planning. This table shows the general trends (increasing or decreasing) of variables for each proposed storyline. 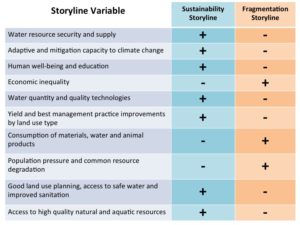 Click table to enlarge: This table shows the general trends (increasing or decreasing) of variables for each proposed storyline.

There are many other possible futures that have yet to be articulated within the sustainability-fragmentation continuum. These two, disparate scenarios serve as a valuable starting point for understanding how policy decisions, trade and consumption, population growth and land use and management practices could drive nutrient export at river mouths. Having cohesive regional storylines enables researchers to make quantitative projections about variables such as nitrogen and phosphorous added to waterways, which depends on regional population growth, people’s diets and agricultural land management policies. Some sources of nutrient export can be expected to shift according to the region’s level of integrated regulatory systems. For example, phosphorous inputs are highly dependent on policies that control how detergents and fertilizers are sold and used and the degree to which wastewater is treated before being returned to the aquatic system.

Crafting scenarios in close collaboration with agencies that make regulatory decisions, industries that operate in the region, and organizations that advocate for environmental protection and green technology is important to ensure that variables of interest are represented in the scenarios and quantified appropriately. At a water quality workshop held in conjunction with BioEarth in March 2015, some of these stakeholders from Washington and Oregon shared recommendations and questions about the two proposed shared socioeconomic pathway storylines. You can read the workshop report for a summary of those recommendations. Please comment here with your suggestions about which of the variables or elements of the storylines should be included or emphasized, and suggestions of how the storylines could be quantified.

This is a world making relatively good progress towards water security[1], with sustained efforts to achieve development goals, while reducing resource use intensity. Elements that contribute to this are: a growth in economic development of low-income counties, a reduction of inequality (regionally and within economic sectors), a rapid trend in technology development, and a high level of awareness regarding environmental degradation. Rapid economic growth in low-income counties reduces the number of people below the poverty line and increases quality of life and human well-being. The region is characterized by an open, globalized economy, with relatively rapid technological change directed toward environmentally-friendly processes, including water-quantity efficient and water-quality improving technologies, improved management practices and yield-enhancing technologies as they relate to agricultural, forest and urban lands. Consumption is oriented towards low material growth and water resource intensity, with a relatively low level of consumption of animal products. The population pressure is relatively low. The EPA’s Safe and Sustainable Water Resource Action Plan (EPA 2012) is achieved within the next decade or two, resulting in educated populations with access to safe water, improved sanitation and medical care. Other factors that reduce vulnerability to climate and other exogenous changes include, for example, the successful implementation of ambitious policies to control air pollutants and water degradation, and rapid shifts toward universal access to high quality natural and aquatic resources in the region.

[1] Water security is defined as, “The capacity of a population to safeguard access to adequate quantities of water of acceptable quality for sustaining human and ecosystem health on a watershed basis, and to ensure efficient protection of life and property against water related hazards – floods, landslides, land subsidence, and droughts.” (UNESCO-IHP 2012).

In this future vision for the region, it is separated into subregions characterized by inequity, with pockets of moderate wealth and a bulk of locales that struggle to maintain living standards for a rapidly growing population. Subregional blocks of administrative jurisdictions emerge with little coordination between them. This is a world failing to achieve global, national, and subnational development goals, and with little progress in reducing resource usage intensity, or addressing environmental concerns such as air pollution and water quality degradation. States, counties, resource districts and metropolitan areas focus on achieving water and food security goals within their own domain. The world has de-globalized, and international and national trade, including water-based product sectors and agricultural markets, are restricted. Little cooperation and low investments in technology development and education slow down economic growth in high-, middle-, and low-income subregions. Population pressure in this scenario is high as a result of education, economic and climate-driven immigration trends. Growth in urban areas is haphazard and opportunistic without regard for sound land use planning principles and long-term horizons. Unmitigated water demand is relatively high, driven by high population growth, inefficient use and slow technological change in the water resources sector. Investments in human capital are low and inequality is high. A subregionalized world leads to reduced trade flows, market mechanisms for water resource trading, and an increased pressure on common resources; leaving large numbers of people vulnerable to climate change and water scarcity, particularly in locales with low adaptive and mitigation capacity.