Flashback. While cleaning out a corner of the building I work in I found several dozen old Popular Science magazines. The November 1997 issue caught my attention because of two articles featured on the front cover. See if you find anything striking as you read the titles and the first paragraphs of these cover stories. 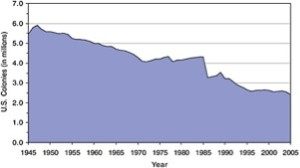 Digital TV: Problem solved. I am not even sure you can get a TV that is not digital anymore. The article reminded me of the John Prine lyrics. “We are living in the future, I tell you how I know. I read it in the paper, 15 years ago.” (Living in the Future)

Plight of the Bees: Nothing has changed. Here is a Jan 2015 feature article in National Geographic (Dying Bees Spell Trouble for US Agriculture and a great 2015 TED Talk on declining bee populations by researcher Dr. Marla Spivak (University of Minnesota). Both are explaining the same problem nearly as they did in 1997 and the risk to our food supply. Honey bee die off of 30% per year due to poor health of bees resulting from the contributing factors of pesticides, parasites, monocultures, and flowerless landscapes). We may know more details about the problems in 2015 but have not made any progress on solving the problem.

I get that these are two really different topics, entertainment and food supply, but am fascinated on how quickly some issues are resolved while other critical issues, like the vulnerability of the world food supply, seems to be stuck in stagnant water.

More important, and maybe more relevant, is that the public have not come to the point where there are empty shelves at the grocery store because of this population decline.

The good news is that those responsible for keeping bees and pollinating crops have been resourceful and resilient. A coalition of research labs and universities called BeeInformed, (along with other groups I am sure) is conducting research and working directly with beekeepers on new management and technology to maintain healthy hives.

I see many similarities in the story of bees and the topic of animal agriculture in a changing climate. My hope is that when I read the paper 15 years from now (2030), I can look back and clearly see progress on these topics.

–
David Schmidt MS. PE is a researcher and educator in the Department of Bioproducts and Bioysystems Engineering at the University of Minnesota and regional project coordinator for the project Animal Agriculture in a Changing Climate, a national project of the Livestock and Poultry Environmental Learning Center and funded by the USDA National Institute of Food and Agriculture.

The post Flashback appeared first on Animal Agriculture in a Changing Climate.