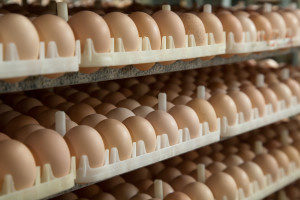 Having all your eggs in one basket is not such a good idea if you should trip and fall.

When thinking about adapting to climate change I typically focus on what needs to happen on a specific farm, animal species, or geographic area. I don’t often think globally about the more important risk to the global food supply. Here are three things that have come to my attention in the last week regarding having all of our ‘eggs in one basket’.

I am not an expert in food production or risk management but common sense tells me that we are putting way to many eggs in one basket. I see climate change as just one of the many threats to this concentration of our food production system.

–
David Schmidt MS. PE is a researcher and educator in the Department of Bioproducts and Bioysystems Engineering at the University of Minnesota and regional project coordinator for the project Animal Agriculture in a Changing Climate, a national project of the Livestock and Poultry Environmental Learning Center and funded by the USDA National

The post Eggs in One Basket? appeared first on Animal Agriculture in a Changing Climate.