No-till (e.g. direct seed) and reduced tillage practices have become reliable management strategies in many cereal-based cropping systems of the Pacific Northwest (PNW), particularly for growers who are concerned about soil erosion. In combination with effective nutrient and pesticide management plans, eliminating or reducing tillage can decrease degradation of regional soil, air and water quality.

Often when we consider reduced tillage practices in the context of climate change, we think about their impacts on greenhouse gas emissions (e.g., nitrous oxide, carbon dioxide and methane) and sequestering soil carbon (e.g. long-term experiments and conservation management). Carbon and nitrogen losses can be reduced by minimizing tillage practices, but we must also consider adaptive strategies to climate change as well as those that mitigate. Overall projected climate change events for the PNW include warmer average annual temperatures, increased winter precipitation in the form of rain instead of snow, decreased snow pack and increased extreme precipitation events. It is interesting then to consider, how tillage practices themselves might be altered as timing and intensity of precipitation and temperature change.

University of Idaho M.S. student, Paige Farrell considers some possible scenarios in her research at the Applied Climate Science Laboratory in Moscow, ID. Using a Water Erosion Prediction Project (WEPP) model, she compared soil erosion rates and other environmental drivers under varying topography and tillage scenarios, assuming a representative warming scenario of 4°F for the mid-21st century. When compared to historical data from 1979-2009, on a moderately flat slope, an increase of 4°F could double annual soil loss from 0.17 to 0.34 tons per acre under conventional tillage or  triple it from 0.02 to 0.06 tons per acre in a no-till system (Figure 1). 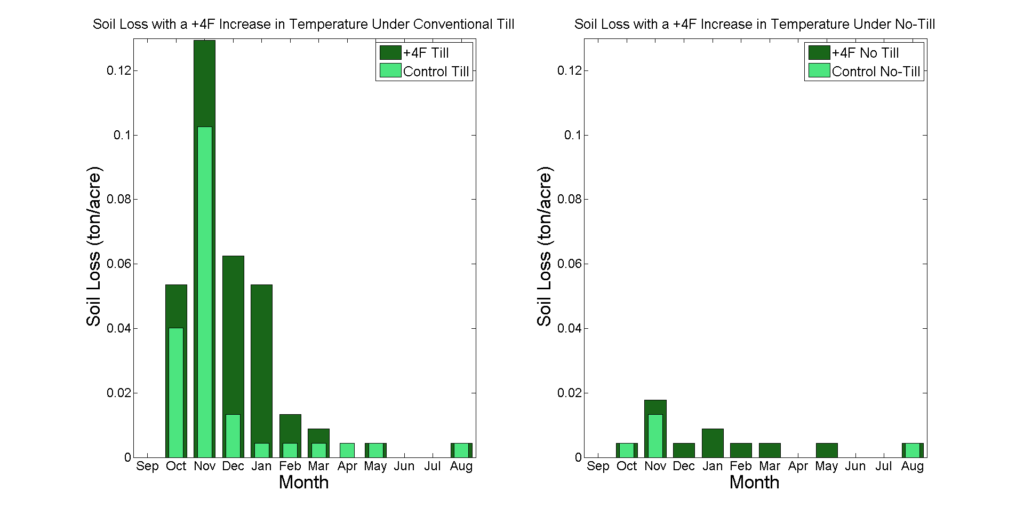 In general, soil loss is predictably higher in the PNW after harvest in fall and winter months, when rainfall is high and crop cover is low. In all scenarios considered by Farrell, soil loss was greatest in the month of November (Figure 1). The most notable consequence of a 4°F warming scenario was increased soil loss during December through March. Under conventional tillage, increases of approximately 0.05 tons per acre are expected each month in December and January. Similarly, prior to warming, soil loss was negligible in a no-till system from December to March and in May, whereas higher temperatures could result in losses of 0.005 to 0.01 tons of soil per acre each of these months.

Higher rates of soil loss are likely due to less snowfall and more rain. Under the 4°F warming scenario, rather than 13 inches of snowfall (assuming 25% snow water density), approximately 3.25 inches of rain will fall from November to March (Figure 2). As more precipitation falls in the form of rain instead of snow, rain will run off of fields more rapidly, snowpack will be less, and existing snow will melt more quickly. Rain melt is expected to be higher than historical amounts in November through January, but lower than historical amounts in February and March, likely because there will be less snow to melt during these months (Figure 2). 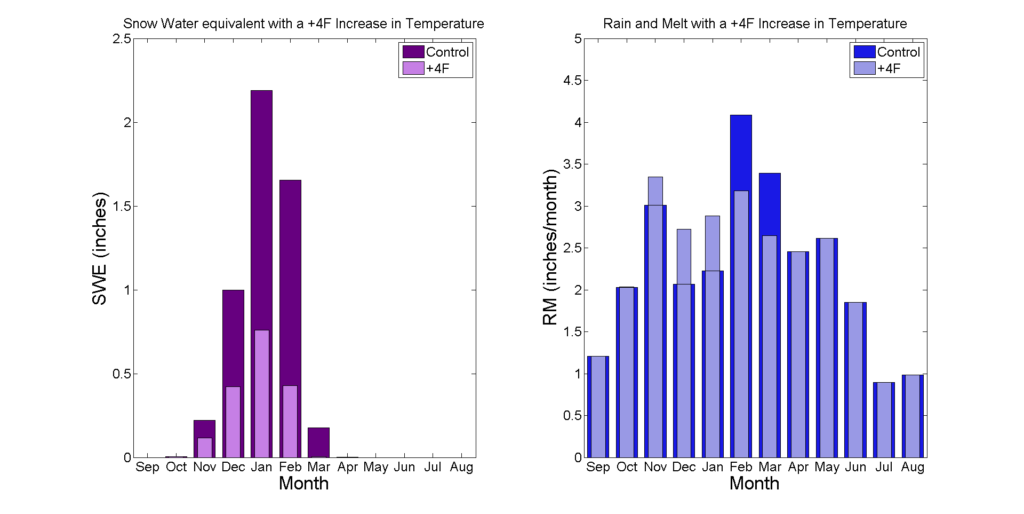 However, warmer temperatures also have the potential to allow crops to develop earlier and protect soil from warming-driven losses (Figure 3). An approximate increase of 5 tons of live biomass per acre during February to June is expected under the predicted warming scenario, despite tillage practices. This additional above and belowground biomass can help hold the soil in place and temper soil loss. 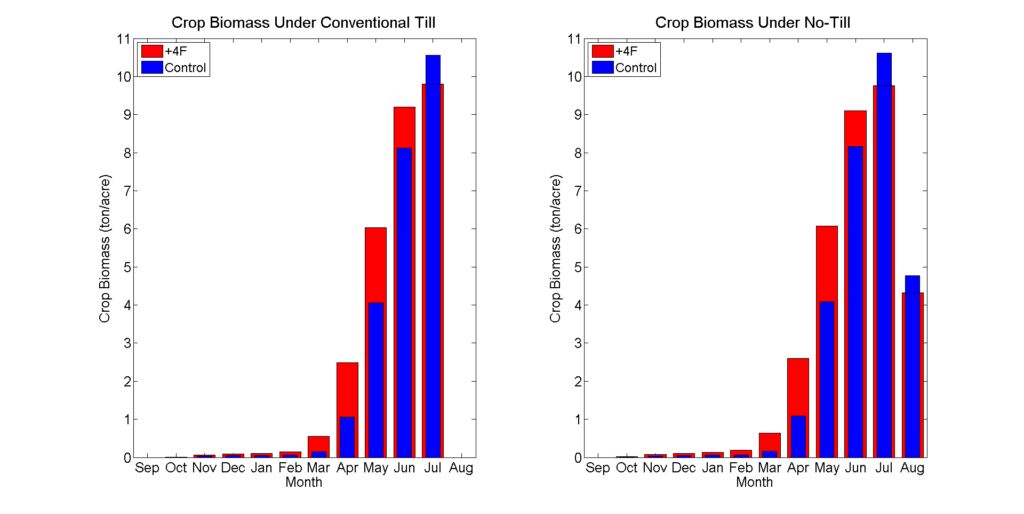 Figure 3. Amount of live biomass under conventional tillage (left) and no-tillage (right) each month with an increase in temperature.

Climate driven temperature and precipitation shifts will have multiple impacts on farming systems. Because no-till practices substantially reduce soil loss, reduced tillage approaches will likely become more necessary as soil loss is exacerbated by climatic shifts. Practices that focus on increasing plant biomass production and cover such as planting time, crop and variety selection and crop rotation will provide further opportunities for mitigating soil loss. Understanding the various ways that climate can impact soils and landscapes offers us an opportunity to explore land management strategies that protect regional farmland into the future.

One thought on “The Impact of Climate Change on Soil Erosion”