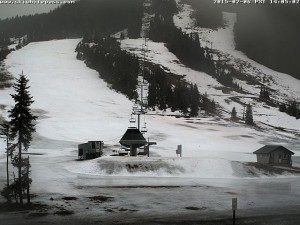 Patchy snow at the Summit at Snoqualmie ski area in February 2015 exemplifies the lack of snow in the Cascades. Photo: S. Ringman, Seattle Times. Accessed via P. Stevens https://flic.kr/p/qegBhX

I will remember winter 2014-2015 as the winter of seemingly never-ending fog, and snow that didn’t stick. That sucks on so many levels, particularly for what it will mean come July and August when we have a serious water problem in the Inland Northwest. I keep getting asked “is this climate change” and “is this what we have to look forward to?” I’ll defer these questions to my colleague John Abatzoglou at UI who just responded to them:

“…the climate of NW this winter serves as a preview of what might be more “normal” by the middle part of the century.” John Abatzoglou, Coming Soon: The New Normal?

That sucks even more.

But what does it actually mean for agriculture in the NW?

It is likely that the most detrimental effect of this “new normal” is the one that is most visible and obvious. A lack of snowpack in the Cascades drives drought in July-September – the critical point of the growing season for most crops in the Inland NW. It’s kind of odd to use the nomenclature of drought when we’ve had close to normal historical precipitation this winter over much of the region, but drought here really refers more to whether we have sufficient water in the stream during the high demand of summer or not. Winter snowpack typically feeds melt water to our rivers and streams from early spring through summer. Warm winter temperatures with reduced or absent snowpack result in summer drought, regardless of precipitation, unlike so many other crop production regions.

But really, what does this mean? Is this summer going to be devastating to our region’s agriculture and a sign of hard times to come?

About 2 ½ years ago, I introduced the then-newly-published Water Supply and Demand Forecast for the Columbia River in Washington State. The Washington State specific estimates of future water supply and demand in that report are presented in a chart at the end of my introductory article. Depending on how you look at those results, we either need a lot of water to solve existing water demand for instream flows or a little bit of water to solve forecasted demand for future irrigation and municipal water needs. The issue is that in an average year, a little bit more water [relatively speaking] satisfies most of both fish and human demands, but that in a drought year (particularly a bad drought year) we need a lot more water to meet both out of stream and environmental needs – and therefore both fish and irrigation are detrimentally impacted. In particular, the problems are most acute in specific tributaries of the Columbia, like the Yakima (already predicted 73% pro-rationing for junior water rights holders this year). If this winter is a glimpse of the new “normal” for mid-century, that presents a pretty stark challenge we need to solve over the next 35 years. 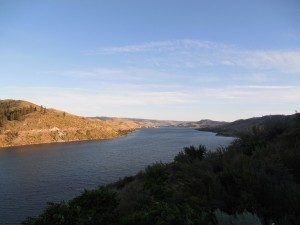 What we can do to solve this challenge is complex. In reality, there is no global carbon mitigation strategy that resolves the concern of significantly reduced Cascade snowpack by mid-century (perhaps we can have an effect by late century or beyond), so this really is a question about whether to invest (or not) in adaptation. The traditional answer is to build more water storage capacity in reservoirs like the recent Lake Roosevelt expansion – and that is likely a part of the solution. Building a couple hundred thousand acre feet of water storage is probably a good possibility over the next 35 years, but building over 14 million acre feet is not going to happen (both from an economic and a biophysical perspective). That means that solutions are likely to need to be more creative – and will require a combination of infrastructural investments (reservoirs, pump storage, etc.) and human adaptations such as active water marketing and selective deficit irrigation.

The one thing that is very clear is that our Inland Northwest agricultural system is likely to look distinctly different in the future if this winter is a good indication of what that future looks like. I’m on record as saying that I do not think we face an unmanageable challenge (1, 2, 3), but that there are compelling scientific reasons that we should take this issue very seriously (4, 5). While we are making progress sufficient to solve “little water problems”, at this point, we are not progressing fast enough to solve the “big water problems” we will have if this winter is the “new normal”.