A friend recently remarked to me that this winter has felt a little like the five stages of grief: following a December filled with promise, January was spent in denial; February included the tell-tale frustration, bargaining and depression; and now in March a growing acceptance that winter dealt us cards we wish we could fold. Unfortunately, the numbers tend to back up that sentiment.

As of March 16, the Natural Resources Conservation Service (NRCS) reports Oregon snowpack at a high of 39% to as little as 6% of normal for this time of year. While Idaho is faring better, Washington is in a similar situation as Oregon with snowpack measuring from 20% of normal, to teens or even single digits. Yet, the irony is that we have not been particularly dry. In fact, NRCS reports that these same snow-absent watersheds have had near normal precipitation to date. Translation: we have the moisture but are getting more of it as rain, not snow. 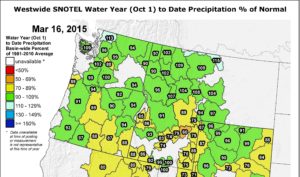 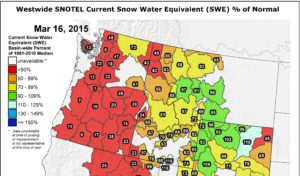 Earlier this month, John Abatzoglou, at University of Idaho made a blog post titled Coming Soon: The New Normal?, in reference to how this winter compares to what we might expect in the future. In particular he looked at projections of temperature and precipitation for mid-21st century in the NW and found an eerie similarity to what we have experienced this year. Projections show relatively normal precipitation but well above normal temperatures – nearly 4-5˚ F above average in the mountains for this year – resulting in precipitation falling as rain, not snow. From a streamflow perspective, research shows that as we move into a warmer climate the transition from snow to rain results in streamflows occurring earlier in the year when water demand is low, while spring peak and summer flows are greatly reduced when demand is high. In other words, warming is expected to mess up the timing of our water supplies but not necessarily the volume.

A few weeks ago, OSU Extension hosted Kathie Dello from the Oregon Climate Service and me in a meeting with agricultural producers from Eastern Oregon to discuss how these changes could impact production in the NW. Following conversations around short term strategies to cope with this year’s anticipated water shortage (e.g. replacing sugar beets with dry beans, opting to file with insurance, etc.), I posed the question, “what will you do if this becomes the new normal?” Not surprisingly, the question garnered tight lips and grimaced faces as producers mulled over what crops can support a farm with only half a season of irrigation supplies.

More recently I spoke with a producer from that meeting who told me that efforts in years like these are spent just trying to make it through and hoping for a return to normal next year. That strategy, he noted, becomes less and less viable if we move into a future where the deck is being stacked with years that are warmer and rainier. At this point, the research suggests we ARE moving into a future of warmer and rainier winters and underscores the need to begin moving away from a strategy of coping with poor water years in favor of one where we are adapting to a new normal.