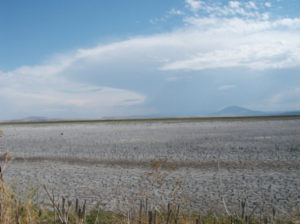 A NEW PAPER published in the Journal of Climate suggests that the risk of decade-long droughts, like the Dust Bowl in the 20th century, may be greater than previously estimated.

The greatest risk is in the Southwest United States, where the likelihood of these droughts occurring once every 50 years is possibly greater than 80 percent with increasing greenhouse gases. The risk of “megadroughts” — those that last for multiple decades — also increase in the Southwest from nearly zero up to 50 percent by the late 21st century.

In this study, records of past drought from instrumental observations and paleoclimate records, such as tree rings that may go back thousands of years, are combined with projections of future precipitation from 27 global climate models from the Coupled Model Intercomparison Project (phase 5). This method, the authors argue, provides a more robust estimate of drought by considering both internal drivers of drought, along with influences from future greenhouse gas emissions.

The silver lining, at least for the Pacific Northwest, is that megadroughts are much less likely, increasing from nearly zero under present-day conditions to 20 percent by the end of the century under the worst greenhouse gas scenario. The study even suggests that the risk of decadal drought in the Pacific Northwest, with a 50 percent to 60 percent chance of occurring today, actually decreases to 20 percent to 30 percent under increasing greenhouse gases.

These findings should be taken with caution, though, since unlike other regions, precipitation in our region is not expected to change markedly. The greater risk for the Northwest is the transition of precipitation from snow to rain in the mountains as temperatures rise. Similar to 2014 (and the way 2015 is shaping up), this change will likely increase our streamflows during winter when less water is needed, at the cost of spring and summer streamflows when demand is greatest.

A version of this story originally appeared in the January 2015 Issue of The Climate CIRCulator.