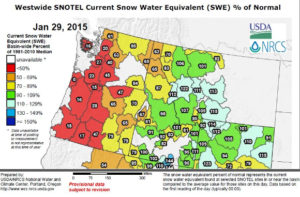 YOU’VE PROBABLY noticed there isn’t much snow in the Cascades this winter. The reason is temperature.

Winters in the Pacific Northwest are typically wet. This winter has been no exception. Precipitation has been above normal for Oregon, Washington and Idaho since the start of the water year on October 1.

Temperatures, too, have been above normal. So despite the high precipitation, snowpack in Oregon and Washington’s Cascade Mountains are at a near-record low for this time of year. In fact, mid-January snow-water equivalent in the Oregon Cascades was less than a quarter of normal, according to the National Resources Conservation Service. In Washington, the snow-water equivalent was only slightly higher, reported the service, the federal agency responsible for monitoring precipitation and snowpack in the Pacific Northwest. It’s a similar story elsewhere in the region.

Except for skiers and snowboarders, why should anyone care if precipitation falls as rain and not snow? The answer is summer water availability. Across the West, many communities rely on snowpack as a kind of natural reservoir. Less snow spells a smaller reserve when it’s needed most during the hot, dry summer.

For a glimpse of what next summer might look like, we need look no farther than last year’s records when low snowpack plagued most of the Northwest. Southern Oregon, for example, experienced severe drought conditions.

Avoiding last year’s fate is still possible. An active late-winter/early-spring pattern could bring big snows to the mountains. But it’s looking like that might not happen. The temperature outlook from the National Oceanic and Atmospheric Administration’s Climate Prediction Center for the remainder of this winter shows increased odds of above-average temperatures in Oregon and Washington.

Here’s hoping for some late-season snow.

A version of this story originally appeared in the January 2015 Issue of The Climate CIRCulator.