Dr. Larry Jacobson, one of the leaders on this project, attended a national conference in Washington DC in December. He wanted to share a short summary of the conference with you.

Here is his reflection. 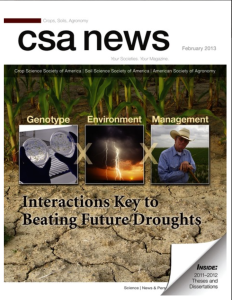 During a two day conference last month in Washington, DC, put on by the Renewable Natural Resources Foundation, entitled “Adapting Food Production to a Changing Climate,” presenters and participates (about 60 people from around the country and from government agency, universities, foundations and commodity groups) heard and discussed issues on how we can increase food production during a time of changing climates. I had two key take-home messages.

The first was during a presentation by Dr. Charles Walthall, USDA-ARS, National Program Leader for Climate Change, Soils and Air Emissions Research Program. He introduced a framework or approach to finding solutions on how to address for not only maintaining but increasing our food production during future changing climate. It was shown schematically as:

This concept has been suggested by others and he referenced the CSA news article Genotype, Environment and Management: Interactions Key to Beating Future Droughts (CSA news Feb, 2013)

He indicated in his view there has been too much emphasize on genetics, and we need to also consider both environmental and management solutions in dealing with this wicked issue of increasing food production during a time of changing climates. As an addition to this approach, Dr. Walthall added Post Production to the formula or G x E x M x P. He stressed that collaboration is essential if we hope to accomplish increasing food production in the future.

My second take-home was the lack or very limited information presented on animal agriculture during the two-day conference. Although, several presenters mentioned how we could increase animal agriculture and the trend for increase demand on animal protein in the world, very few had specific ideas on how best to do this or even if it could be done.

Food production, both plant and animal, will be critically important as the world’s population increases and our climate changes. Video recordings and PDFs of speaker’s PowerPoint presentations are available on the congress website. (http://www.rnrf.org/2014cong )

David Schmidt MS. PE is a researcher and educator in the Department of Bioproducts and Bioysystems Engineering at the University of Minnesota and regional project coordinator for the project Animal Agriculture in a Changing Climate, a national project of the Livestock and Poultry Environmental Learning Center and funded by the USDA National Institute of Food and Agriculture.