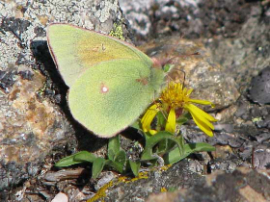 Colias butterflies in the Rocky Mountains are a thermally-sensitive species that face challenges due to climate change. National Park Service/Stacy Sink

STUDYING THE DETAILS of temperature fluctuations is essential to understanding how both individual organisms and whole ecoregions will adapt under climate change. But many studies could be missing an important nuance.

Most studies examining long-term changes in temperature tend to focus on trends in the mean, or average temperature, as well as on the highest of the high and the lowest of the low temperatures. In fact, a paper by CIRC researcher John Abatzoglou (University of Idaho), highlighted in the October CIRCulator, did just that for the Northwest, finding large increases in the coldest day of the year. Now a new study by Abatzoglou takes a different approach, examining the highest of the lows and the lowest of the highs.

The Abatzoglou study used data from 1,218 US Historical Climate Network stations from across the contiguous U.S. for the period 1920 to 2013. Nearly half of the stations had their highest maximum daily temperature (TMAX) in the 1930s during the Dust Bowl. During the same period, over a quarter of the stations also had their highest minimum daily temperature (TMIN).

Nearly 25 percent of highest TMAX records were set in a single month, July 1936, primarily at stations across the Great Plains and Midwestern U.S. (The records coincide with low soil moisture and broad-scale ridging.) Over 8 percent of the lowest TMAX records occurred in January 1985, coinciding with a cold-air outbreak that brought record low temperatures to the southeastern U.S. and widespread impacts to the Florida citrus crop. The period 2000–2013 was remarkable for its lack of lowest records (1 percent), and it had a moderate number of highest records (10 percent).

Employing 20 global climate models, Abatzoglou then examined the evolution of absolute temperature records through the mid-21st century under the high-end greenhouse gas scenario, Representative Concentration Pathway 8.5 (RCP 8.5). The simulations showed a continued increase in the prevalence of the highest TMAX and decreases in lowest TMIN through the mid-21st century.

Approximately half of all highest records for the period through 2049 occurred in the last decade of model simulations. By contrast, the occurrence of the lowest records declined in the 21st century with just 2 percent of such records occurring in the last decade of the period analyzed. In other words, high temperatures are expected to get higher and low temperatures are also expected to get higher. It’s still to be seen what this means for how organisms and ecosystems might adapt to these changes.

A version of this story originally appeared in the November/December issue of The Climate CIRCulator.