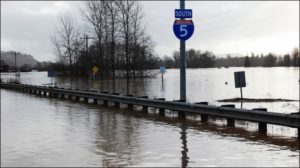 In December 2007, the Chehalis River flooded Interstate 5 in Centralia, closing the freeway and impacting north-south travel and commerce for several days. NOAA

AS THE NORTHWEST WARMS, most river basins will become more prone to flooding, while others will remain relatively unchanged, a study from the University of Washington suggests. Flood risks appear to be linked to winter temperatures (which are largely determined by elevation).

Lower-elevation, warmer-winter basins in Oregon and Washington could tend to flood more as regional temperatures rise, according to the UW team led by Eric Salathé. By running a sophisticated hydrologic model (Variable Infiltration Capacity) along with a regional climate model for both past and future climates, they found higher incidences of 100-year floods in the future for all of the warmer, lower basins. (A 100-year flood is so-called because it has only a 1 percent chance of occurring in any given year.)

Most, but not all, of the cooler basins, also show increases. The coldest basins (those with a mean winter temperature less than -7 degrees Celsius or 19 degrees Fahrenheit) are split down the middle: Some show more flooding, some about the same, some less.

The study’s main conclusions are shown in the figure below, in which the y-axis is the ratio of future (2050s) to past magnitude of 100-year floods, where 1 means no change, and 2 means a doubling. Colors indicate the month when the 100-year flood typically occurs: warm basins in the fall, coldest basins in summer.

Our Editorial Opinion: This is a valuable study and more work is needed, particularly to quantify the range of possibilities. In 2011 a team led by Francina Dominguez from the University of Arizona studied extreme precipitation using data from the North American Regional Climate Change Assessment Program (NARCCAP). The NARCCAP regional models had changes in extreme daily precipitation for the Northwest ranging from negative 5 percent to 30 percent, with an average of about +10%. While those were regionally averaged results, and for precipitation not streamflow, they show that the choice of regional model can strongly affect results. Repeating the UW study with a few different combinations of regional and global climate models would help elucidate how robust these results are.