Likely true, but what does this mean?

This first graph shows temperature over time with a general lack of increase in warming since 1998. 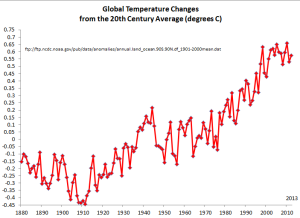 This past week I had the rare opportunity to meet someone who “wrote the book.” This has never happened to me before. Unfortunately, I did not know he “wrote the book” until after our chance encounter. My meeting was with Dr. Benjamin Santer. His job at the Lawrence Livermore National Labs is to validate climate models. His name was vaguely familiar to me but it was not until after our meeting that I found out he was lead author on chapter 8 of the 1995 IPCC Assessment report titled “Detection of climate change and attribution of causes”. (OK, so he did not “write the book” but at least a chapter in a pretty impressive report. He is also well published and in the media quite often as a climate model expert. )

Had I known his fame, I would have been afraid to ask a stupid question, but since I did not, I asked the question I am often faced with: “So why aren’t the climate models predicting the pause in warming over the last 17 years?”

His response was clear and he made no excuses. He said there were basically four schools of thought to this problem. (Sorry Dr. Santer but I need to simplify and I hope I got it right.)

Dr. Santer’s most recent paper “Volcanic contribution to decadal changes in tropospheric temperature” (Nature Geoscience. Vol 7, Mar, 2014 pp 185-189) focuses on explanation #4. As is well known and documented with observational data, volcanoes contribute aerosols to the atmosphere and these aerosols have a cooling effect on the planet.

My take home message from my conversation:

Next week I will give you some highlights of the Climate and Cattle Conference held in Oklahoma last week.

*Coupled climate models are three dimension mathematical representations of the Earth’s atmosphere, oceans, and land in terms of energy and moisture exchanges driven by solar radiation and modified by feedback mechanisms that mitigate these exchanges (vegetation, snow and ice cover, cloud cover, etc). The derived climate attributes of pressure, temperature, moisture and wind are grid based and therefore of a variety of scales depending on the resolution of the models.

The post The earth hasn’t warmed since 1998 appeared first on Animal Agriculture in a Changing Climate.