In two prior posts (threats and variability), based on our research, I have argued that climate change is not likely to be a major cause for concern for agricultural production in the Pacific Northwest until at least mid-century. A little bit of warming and a little bit of CO2 elevation is actually positive for most crops in the PNW. In this post, I’m going to tell you why I might be wrong.

Steve Davis of UC Irvine presented a fascinating, if somewhat disturbing, picture of the trajectory of global greenhouse gas emissions at the Fifth Annual Pacific Northwest Climate Science Conference. You can watch his presentation here. In his talk, Davis clearly demonstrated that when accounting for current and anticipated investments in global fossil fuel-based energy systems – particularly investments to be made in China – the most likely trajectory of global greenhouse gas emissions best aligns with the RCP 8.5 emissions scenario – IPCC’s worst-case scenario! Furthermore, he argues that the level of action that must be undertaken to avoid this scenario is practically implausible. While this was no surprise to me, it was still quite stark to see it presented. If you have 40 minutes, it’s definitely worth watching.

According to the 2013 Northwest Climate Assessment, the range of warming projected for RCP 8.5 is 7 – 14 degrees F by the end of century, and 3 – 9 degrees F of warming by mid-century! For those who prefer a graphic representation, look at the dark red line and red shaded cloud for the RCP 8.5 projections in the figure below. 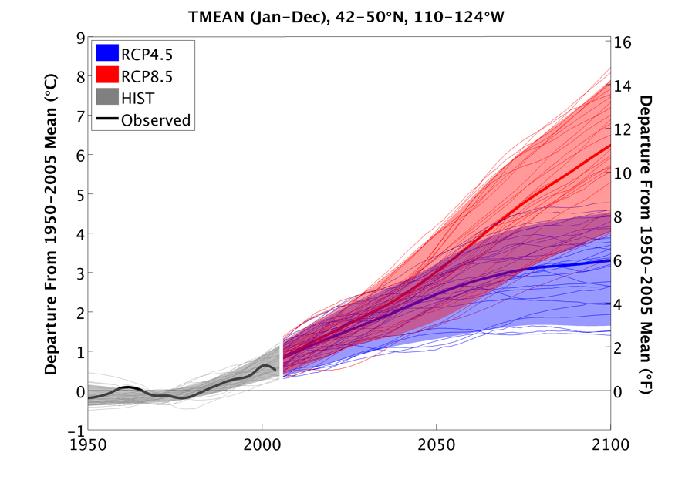 So, why does this mean I might be wrong in my prior posts? Surely we are capturing the range of possible warming scenarios in our yield forecasts?

The answer is that yes, we do capture the range of projected warming trends in our yield forecasts. However, the results we present are usually the average of the range of forecasts for a given time period (e.g. 2030s, etc.). In other words, the yield forecasts that we [and others] have presented are likely to be based on a much more optimistic forecast of future temperature increases (i.e. less warming) for the given time period.

Put another way, the timeframe for future forecasts could be thought of as much shorter into the future. In the figure above, the difference between the average of RCP 4.5 and RCP 8.5 for 2050 is not that large, while both the gap and range are much greater toward the end of the century. When we’ve projected crop yields for the average of the range of projections for end of century, the message is much less positive for many crops in the PNW – and the higher end of the range creates much more cause for concern than the mid-century forecasts. In terms of crop production, the end of century is a long way off and we have plenty of time to think about how to deal with that worst case scenario.

However, if the more realistic trajectory of global emissions looks like RCP 8.5, our yield forecasts for the end of century are likely to occur much sooner – perhaps by mid-century. The concern this raises is that many of the adaptation strategies (e.g. new crop varieties, water storage, improved management) we might assume could be developed on a 50-70 year timeframe now need to be developed on a 20-40 year timeframe. That gives us much less margin for error and makes our own situation by mid-century in the PNW look like what other crop production regions are already concerned about.

To be candid, I’m still not extraordinarily concerned about our ability to manage the near and intermediate-term rate of change even if we do follow the RCP 8.5 emissions scenario. We have only begun to explore the adaptive capacity of crop production in the region, and the little we have done indicates we have a fair amount of flexibility. Even so, it is much more comfortable to think about employing that adaptive capacity in 50-70 years than in 20-40 years.

Two years ago, I wrote a post arguing that avoiding the worst case scenario is a good justification for farmers to be engaged in management activities that reduce their carbon footprint. We know that agriculture alone cannot solve the carbon budget, but that it can play a meaningful role. Now that it’s becoming much clearer that the worst-case emissions pathway is the most likely pathway, activities like soil carbon sequestration should get a fresh look.