In a previous post, I explained that available evidence currently indicates nitrous oxide emissions may be fairly low in the inland Pacific Northwest, compared to other cropland agricultural systems in the U.S. and world. If ongoing research confirms these early results, then I suggested that efforts to reduce nitrous oxide emissions need to focus on strategies that offered strong co-benefits.

One such strategy is the use of precision nitrogen application tools to closely match plant nitrogen needs as they vary within fields. Precision nitrogen technologies are particularly appropriate in the Palouse region of Washington and Idaho, where soils, water dynamics, and thus yields can vary quite significantly across the rolling landscape. In the photo below, you can see different rates of crop drying, related to variation in soil factors that influence how much water the soils hold. 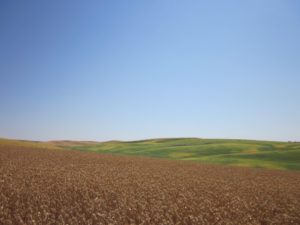 A recent video featuring Eric Odberg (produced by WSU’s Sylvia Kantor) does a nice job of profiling Eric’s use of this technology. Eric isn’t adopting this practice specifically because it reduces nitrous oxide emissions, though available research1 suggests that nitrous oxide emissions will likely be reduced in low-yielding areas of the field that had previously been receiving excess nitrogen. Rather, Eric wants to have a farming operation that is environmentally and economically sustainable. As he says, “I’m fourth generation, and hope to be able to hand it to the fifth generation. Having a sustainable farm is an important part of that….but [I] also want it to be profitable.” Using precision N technologies, Eric has been able to reduce his nitrogen use by about 15%, benefitting both his bottom line and the environment.

The video is accompanied by a written case study that provides additional detail about Eric’s thinking. We hope that this case study can be a resource for other dryland growers interested in adopting precision N technologies. Additional case studies in the series will examine other strategies that innovative farmers in the PNW are using to enhance their resilience in the face of climate change.