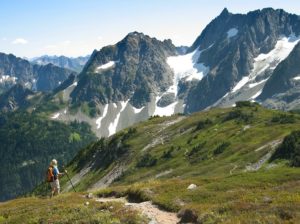 THE WINTER WONDERLAND of snow-capped mountains in the western United States is becoming less snowy. Indeed, a fundamental shift in wintertime precipitation in the mountains and highlands of the American West is on the way, researchers suggest.

Across the region, many communities — among them towns and cities in the wet Pacific Northwest — rely on water stored in mountain snowpack to meet their needs during the dry summer months. But the snowfall that builds this critical snowpack increasingly will turn to rain as our climate warms, according to University of Idaho researchers, including CIRC’s John Abatzoglou. This “snow-dominated” area could contract by as much as 30 percent by the middle of this century if worldwide carbon emissions continue growing rapidly.

What’s more, the season of “exclusive snowfall” (when temperatures are rarely warm enough for rain) in western mountain ranges — typically November to March — is projected to shorten by almost two months. The hardest-hit regions are expected to be the Northern Rockies, North Cascades and Blue Mountains, where winter temperatures will no longer be conducive to exclusive snowfall.

Not only will snow-dominated areas disappear, the extent of rain-dominated areas will expand. Nearly two-thirds of the Columbia Plateau region is projected to experience only rain where in the past there was a mix of snow and rain.

So far, nearly half of the western U.S. has remained cold enough in winter to experience precipitation almost exclusively as snow. But these particular mountain regions are especially sensitive to climate change-induced winter warming. That’s because their mid-elevations and relatively mild winters keep them marginally close to the freezing point where snow becomes rain. By contrast higher elevation and colder mountain regions — such as the Sierra Nevada, Central and Southern Rockies — are projected to retain some areas of exclusive snowfall.

These findings provide a spatially detailed interpretation and extension of observed and simulated trends at point locations, previously published by CIRC researchers Phil Mote and Dennis Lettenmaier, who found that since the mid-20th century, the mountains with mild winters had lost the greatest fraction of their snow. Detailed maps and data depicting the probability of rain versus snow in the western US both historically and in the future are publicly available here.

This story originally appeared in the August 2014 issue of The Climate CIRCulator.

The CIRCulator is brought to you by The Pacific Northwest Climate Impacts Research Consortium (CIRC) and The Oregon Climate Change Research Institute (OCCRI).