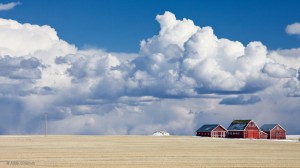 One of the caveats I always state when presenting the results of our research on projected climate change impacts on PNW agricultural production is: we don’t yet know if climate change will disrupt our existing regional climate cycles. To date, the climate forecasts for our region indicate a future where climate change amplifies the current cycles – resulting in a future that is warmer and possibly slightly wetter on average, but still keeping the pattern of relatively short-cycling between wet and dry periods. These wet and dry periods rarely last for more than a couple of years.

As I’ve pointed out before, most of the climate change impacts we’ve forecasted for crop yields fall within the relative range of historic variability for PNW agriculture. We already experience a wide range of climatic variability year in and year out (particularly for precipitation), and our cropping systems and other agricultural infrastructure has evolved to help us manage that variability. A bad precipitation year (or irrigation water shortages) is still costly and challenging for farmers to manage, but for most of the region there is a measure of truth to the proverb that “it’ll be better next year” – at least from a historical climate perspective. In our projections for future climate, the expectation of continued short-lived wet-dry cycles is part of why we’ve been much less concerned about negative climate impacts on agriculture in the PNW than scientists in other regions.

One serious concern we do have though is that many scientists question how well current global climate models perform in forecasting the risk for long-term droughts. A severe drought that lasts a decade or longer would be a game-changer for PNW agriculture. 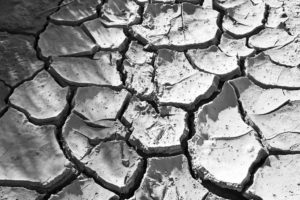 A new study published in the Journal of Climate (Ault et al. 2014) attempts to quantify the risks for decadal and “megadrought” (a drought of at least 30 years) by augmenting the results of climate models with the paleo-climate data record. This paleo-climate record may be a better indicator of long-term drought risk. The authors indicate that using this methodology significantly increases the risk of decadal (>80%) and megadroughts (20-50%) across much of the southwestern US and northwestern Mexico in the next century. Given the extreme nature of the current drought, I think this new insight should be extremely concerning to anyone involved in agriculture in the desert Southwest (not to mention the US food system that has become dependent on that region for a large fraction of the produce we consume).

According to this same study, the authors forecast that the risk of long-term drought in the PNW may decrease slightly; however, they still project the chances of a decadal drought in Washington, Idaho and Montana as high as 10%. I guess that’s relatively good news? While I’m not really concerned about forecasted yield changes of + or -10%, a 10% chance of a decade-long drought is not so easily dismissed.

I think it’s too early to get overly anxious about the risk of a megadrought in the PNW, but this new study demonstrates that sustained drought is a vulnerability we can’t afford to ignore. The reality is that our human experience of climate in the PNW has occurred over a remarkably short period of time and we have designed and built very elaborate agricultural systems and infrastructure based on that relatively short glimpse of climate history. It’s something we definitely need to keep an eye on.