In a recent interview that covered the gamut of oft-cited threats to agricultural sustainability and food security (drought, food safety, energy disruption, economics, terrorism, chemical pollution, genetic pollution, impacts on pollinators, soil erosion, climate change, etc.), I was asked which threat I thought was the biggest. I was completely stumped. For every threat that came to mind as “the big one” I could come up with at least two arguments why a different threat was bigger.

The challenge in answering a question like this is that there are too many qualifiers that need to be considered. By “biggest threat” do we mean most imminent threat, the most severe threat, the threat we have the least ability to influence, or the one that we know the least about? To answer a challenging question like this, we really need a set of actuarial tables – something comparing the (likelihood of occurring) X (severity of impact) X (our ability to adapt/manage). An analysis like this simply doesn’t exist in any comprehensive and systematic way. In the absence of a way to measure the threat, most discussions on threats tend to default to individuals defending his or her favorite threat, often to the detriment of getting anything done.

The only publication I’ve ever seen that tries to quantitatively frame a set of global threats this way was a paper called “A Safe Operating Space for Humanity” published in Nature in 2009. That paper attempted to quantify environmental risks through the lens of planetary boundaries. While it was an interesting attempt at quantification, everyone I know who has read it debates whether it adequately captures or quantifies all of the environmental risks. In addition, there is the consideration that many risks to the planet are not environmental at all – and can be both human and non-human (think asteroids). Furthermore, while agriculture is certainly captured in the assessment as a source of environmental risk, this paper doesn’t actually investigate the question of risks to agricultural sustainability or food security. We really need some kind of scoping study like this for food security, but, like the Nature paper, I doubt such a study would result in findings many of us find satisfactory. 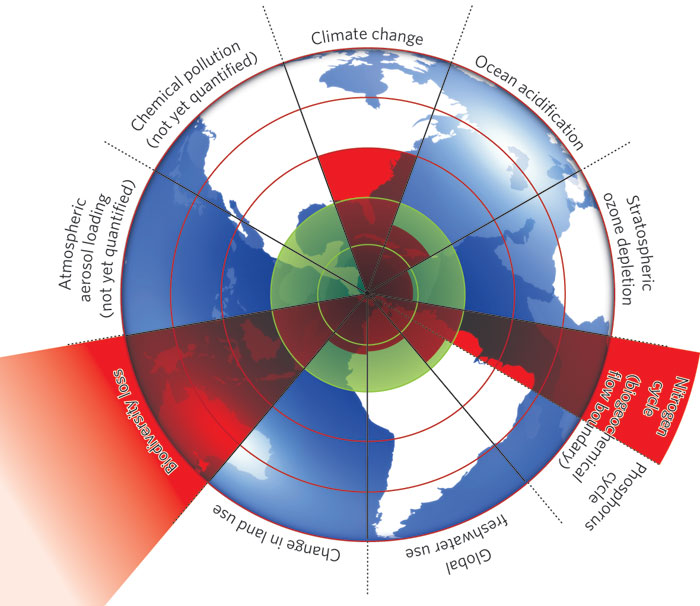 From the following article: A safe operating space for humanity. Johan Rockström et al. Nature 461, 472-475(24 September 2009) doi:10.1038/461472a The inner green shading represents the proposed safe operating space for nine planetary systems. The red wedges represent an estimate of the current position for each variable. The boundaries in three systems (rate of biodiversity loss, climate change and human interference with the nitrogen cycle), have already been exceeded.

Thinking back to the original question I was asked, the only firm conclusion that I can come to is that the threat I understand best (climate change) is probably NOT the biggest threat – at least in terms of direct effects of climate change on agriculture and food security in the Pacific Northwest. Because of my work and expertise, I feel like I have a pretty good grasp on the nature of the climate change threat and therefore feel most comfortable about my ability to quantify what the likely and probable impacts of climate change are and the extent to which agriculture can adapt to climate change in our region. To use my formula described above, climate change has a high likelihood of occurring, a moderately high severity of projected impact (especially over the long-term), but I think our agricultural systems actually have a fair amount of capacity to adapt to/manage the threat as we currently understand it.

Furthermore, forecasted climate change represents more of a “compounding effect” on other threats we already manage rather than a stand-alone threat. For instance, climate change is projected to enhance the probability and severity of drought – but drought itself is something we already deal with and that has always been a challenge to manage. Droughts that are 10-20% worse by mid-century would certainly represent an increased threat, but that seems to be more of a marginally worse impact rather than something new and devastating.

I’m certainly not saying that I think climate change is not a serious threat to agriculture and food security. It very well may be. It’s just that I’m not sure that it is the most imminent, most severe, or the threat we have least influence over. Also, I think we’re beginning to get a much better understanding of the implications of climate change for agriculture in our region, which helps empower us to plan and adapt to potential projected change. Essentially, for me it’s more of a “known known” than most other threats I can think of. I presented this very perspective in a recent presentation I gave describing our research assessments on climate change and agriculture in the region. One member of the audience clearly stated that he didn’t agree with my “rosy picture” – and in his opinion there are already so many sustainability threats that he felt climate change might not just be a compounding concern, but rather the proverbial “straw that breaks the camel’s back”.

Our disagreement may just be the difference between optimism and pessimism, but I like to think that my relative optimism in this case is the result of an increasing scientific understanding of the threat. In fact, I can say with certainty that my perspective on the relative capacity of PNW agriculture to adequately adapt to climate change has become increasingly optimistic over the past decade as our research efforts have continued to explore the threat. I do not think that we should ignore the climate threat as though it’s not serious; I just think that there is a high likelihood that there are other, “bigger” threats to our sustainability. I’m just not sure which is the biggest.