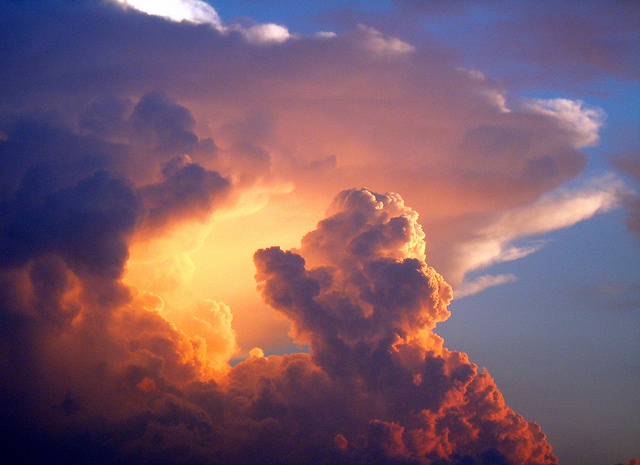 Picture taken at sunset in Iowa following severe weather and tornado outbreak. Image courtesy of the National Oceanic and Atmospheric Administration. No changes were made. Some Rights Reserved.

MANY TYPES OF EXTREME EVENTS will increase in size and frequency in the future. That is the conclusion of climate experts who recently compared climate models to observed data.

The scientists evaluated global climate models’ simulations of extreme events in the United States. They also examined the models’ future projections of the frequency and magnitude of extremes, from hot days to heavy rainfall. The questions were posed during a workshop at the Coupled Model Intercomparison Project phase 5 (CMIP5).

The workshop’s findings — published in the Bulletin of the American Meteorological Society — echo earlier studies. Conclusions include:

Depending on the emissions scenario, models project a 50 percent to 90 percent increase in the annual fraction of precipitation falling in the wettest rainstorms across the country by 2100.

In the Northwest, the 20-year annual maximum precipitation is projected to happen three to four times more frequently by 2100. All models project an increase in the extreme precipitation index, a regionally averaged measure of extreme precipitation that has increased more in the real world than models simulate during the last four decades. In general, there are large differences between climate models in simulating historical heavy rainfall, but that large spread across models is smaller for future projections.

The workshop’s findings were the fourth and last in a series assessing the state of the science and its ability to detect changes in various types of extremes (see The Climate CIRCulator, May 2014).

This story originally appeared in the June/July 2014 issue of The Climate CIRCulator.

The CIRCulator is brought to you by The Pacific Northwest Climate Impacts Research Consortium (CIRC) and The Oregon Climate Change Research Institute (OCCRI).